"I'm tired of playing this corporate game, it's all a façade, I'm done. But, this is the life I chose and I'm gonna do the best I can in this position" ― Kei to Coach Eric

"Keep two eyes, you know what I mean" ― Kei to his assistant Harrison

Male
Kei Noriaki or just "K" is a high-up representative for the TALARIS Corporation from "Savior City", the metropolis that towers over the slums of Callous Row.

Wherever he walks he is accompanied by his assistant Harrison, a giant of a man that is taller than most men.

Kei first visited Callous Row during a quarantine when corporate presence was required. He and his assistant Harrison greeted the mercenaries, including General Cidd from the MARS Corporation, and were escorted safely. He met and struck some kind of deal with the local mayor Coach Eric ending the corporate presence, but he stayed behind himself.

An untold secret part of the corporate presence was that they intended to locate a resistance fighter or "leader figure" named Rook, but if Kei was aware of this is unclear. During his time there, he met with Rook working in his bar "The Grindstone" without revealing any pre-existing knowledge.

In a private meeting with Ikelos, he was gifted a magical crystal, where after the imp nearly fell asleep exhausted on his couch. The tired Ikelos did not protest when Kei collected some of his blood, for which purpose remains unknown.[1]

He would later inquire Rook about entering his bar but was denied entrance due to some renovations and supposedly finding a corpse "in the rafters" to clean up after.

General Cidd is greeted by Harrison and Kei

Speaking to Rook in "The Grindstone" bar 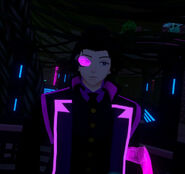 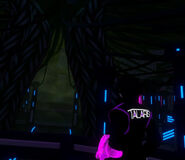 Ikelos is questioned by Kei 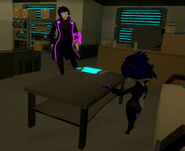 Ikelos is questioned by Kei

Ikelos turns over a magical crystal, held by Harrison

Kei takes a blood sample from the fatigued Imp.

Facing Angelina Greasepalms who is hesitant about him.