Kareeda is a map maker, avatar creator and roleplayer in VRChat. He creates environments and characters for himself and his friends and also accepts commissions.

Mizu Melon is a small person who was a member in Soras Party. He wears a green watermelon onesie with a Mickey Mouse voice. Mizu's one true goal in life is to cure world hunger with the magical watermelons he possesses. Sadly, while Mizu was accompanying the party in a city, he died upon their encounter with Thanos, recreating the "I don't feel so good" scene from the movie.

Mickey Mouse, otherwise known as King Mickey, is somewhat similar to his kid, Mizu Melon, when it comes to the watermelon attire and voice. King Mickey is seen as a mentor for Oras, much similar to their relationship in the game franchise, Kingdom Hearts. Mickey Mouse was first encountered in the Beast's Castle after Oras, fighting a large, round heartless from Kingdom Hearts II and would later appear in a Disney world, raising the PP up of the party.

StealthRP is a parody character combining elements from both StealthRG and his VRChat roleplaying persona Chipz.

Katsukei is a Vampire who has the title of "Lord" in The Vampire Council. Together with Wolfgang he interrogated Chipz for the location of a magical compass.

Rex is a traveler and an amnesiac who doesn't know how he lost his memory. He is sometimes seen at The Purple Lotus and the Neko Nights Night Club. Kareeda sometimes uses the avatar when out-of-character as well.

Kareeda Akiyama is the Headmaster at the Ascension Academy.

Dash Spacer is the medical courier and paramedic working under Dr. Cell together with Cap Fawkes and Celeste at the clinic in Callous Row.

He is a character participating in Callous Row RP hosted by Arcadum.

Reximus Evershine is a student at the Ascension Academy with short, teal hair in a very messy style. He speaks with a odd voice due to an violent altercation with one of his tutors at a young age.

He is a student character contrary to the teacher Kareeda Akiyama participating in Ascension RP hosted by StealthRG.

Melo Melon is an employee of the Melon Corporation in the present day Meta-Verse. As his name suggests he is also melon themed going as far as having his DNA spliced with a watermelon. 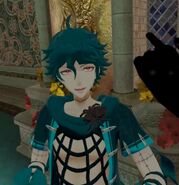 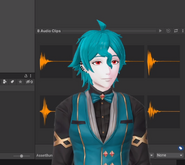 Kareeda using Rex's model in VSeeFace while modeling in Unity