Restaurateur of the "Oasis Grille" in Scrap Town

Blue
To most, Jyggal is the ever optimistic and jolly cat who runs the "Oasis Grille" restaurant in Scrap Town.

Thought by most to be of a very short cat-like species, they're actually a synthetic. This is hardly known by anyone at all.

Jyggal (JY6G A1 Alpha Prototype) is a synthetic cat that lives in the Wasteland city of Scraptown. Jyggal has weaseled their way into ownership of the Oasis Grille in Scraptown and offers a simple menu, specializing in BBQ vermin kebabs and cactus punch.

Jyggal was an experimental synth made to be the “adorable host and ruthless guardian” for an establishment catering to the families of the elite. With a built-in mini bar and a friendly appearance, Jyggal was supposed to bring about a lighthearted atmosphere, but, due to some quirks, this did not go well. They shut Jyggal down after it attacked a teenager for cursing.

A wastelander found and repaired Jyggal years later, and while it's found ways to function in the Wasteland, it harbors a deep hatred for the elite and those that cast it aside.

Jyggal seems unsure about how to approach this problem... 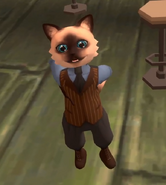 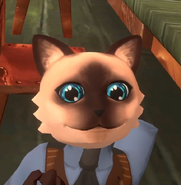 Serving the "tourists" from the upper city, Hortu and Crocolols

Singing on the stage during a gala in the Upper City

Jyggal chasing off a giant rodent in the kitchen 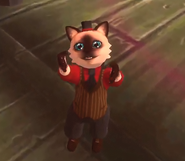 Serving customers at the Grille

Serving customers at the Grille with Jeremy

Showing off her dish, during a cooking competition