Jorongo Weakblood is an orc who uses strength enhancements in order to survive the Wasteland. While not officially tied to local gangs, he will work with them for payment and provide muscle to those in power.

The deformed orc relies on the use of his strength-enhancement formula to survive his day-to-day life. But with his supply slowly dwindling and his addiction growing, Jorongo knows that it is time to do more than just survive.

Together with Kak-To and Sean Ward he used to be known as one of Rico Suave's goons, the former mayor of Scrap Town. Since a new council was established he provides "protection" to the town, in exchange for money.

An opportunist who mainly does things for his own personal gain, a ruthless fighter and occasional scrapper, he's ironically ended up rescuing multiple scrap towners. Carrying them to the hospital on his back - making him a "hero" of sorts after saving Scootz and Sten.

Spectating at the Thunderdome arena in Scrap Town with Wit, Sean Ward and Anna

Healed by Bean after fighting a giant scorpion 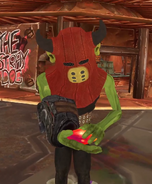