Not to be confused with: Johnny

Male
Johnny TAX-1 or Johnny for short is a synth who spends his days picking up customers and transporting them as need be in the slums of Savior City named Callous Row. Sometimes he uses some not so clever tricks to run the meter up.

From past experience he is partly bigoted towards non-synths, calling them flesh bags and sometimes being vocal and complaining about them. However he won't turn away paying customers.

Due to his programming called "Sonitii Guarantee," his personality will do a 180, and he will flee from ANY sort of violent altercation taking anyone riding within him along for the ride as far away from the danger as possible. Riding with him is very safe thanks to the Soniiti personal safety systems that will protect anyone inside as if they were in a bubble. It won't protect himself however.

He is currently employed by Rebel Ryder.

The Sonitii TAX-1 is an economy-class mass-produced all-terrain utility vehicle, and the "Johnny" series was a variant produced exclusively for public transportation. It is now considered outclassed in many ways by later series Sonitii vehicles. As such most are in the process of being decommissioned and replaced as city vehicles. Johnny was one of these units, mass produced by Sonitii, hardened by use as city transit for many years, and eventually decommissioned. During transit to the scrap yard, a lazy transportation employee for Sonitii instead dumped Johnny in a junk heap. Johnny has developed some obvious issues with Sonitii, and his sentience has only enforced his general opinions of the world and the corps.

He hates Sonitii and just wants to continue to be useful and serve his purpose, to show that he's worthwhile instead of completely worthless and that he's still a perfectly functional transport who can still make money.

Generally not caring for non-synthetics, he formed a bond with Jack Montagne and his employee Duncyn Kuiper who often employed him for their rides. He was very saddened over Jack's passing and since formed an attachment to Duncyn.

Getting a guided tour from GU1D3-B0T along with Warren Crassus

Getting a guided tour from GU1D3-B0T together with Eros 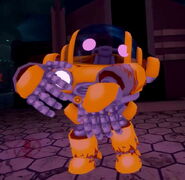 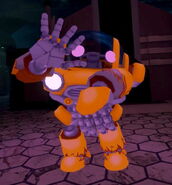 Peeking in through Jack Montagne shop window. Oriana and Becky in the shop.

Blinding Headlights
Add a photo to this gallery

Retrieved from "https://vrchat-legends.fandom.com/wiki/Johnny_TAX-1?oldid=105852"
Community content is available under CC-BY-SA unless otherwise noted.