Jixie Posui is an orange haired girl who is a student at Ascension Academy. She specializes in making mechanical devices and constructs powered by magic. She always has her backpack on her along with her mechanical scorpions on her.

She is portrayed by MerreSmalls.

Jixie transferred to Ascension Academy along with Zackary Fang and Lila Fang (Stream date May 26th, 2019). She was very quiet with her introduction but was excited to show off her creations to the other students. She asked for suggestions for names for her mechanical falcon.

Jixie was born in a Dwarven town called Kadavor. Jixie inherited her mothers curse, causing her to be unable to cast magic properly. Jixie lived in her fathers workshop, learning tinkering and inventing. Years later, she discovered magic and golemancy, making her obsessed with learning more. Jixie is dedicated to protecting her friends and family by researching how to end anything that faces them, but she still holds hunger for knowledge of all things involved with magic.[1]

During the Duat Desert Mission in Year 2, Vanguard and Liang were assigned to return two Komodo Dragons the Academy were caring for back to the local Desert Giants. As they reached the Desert Giant's tribe, they told the squad that there were whispers of a minotaur roaming about but they couldn't pinpoint it's location. Since the Desert Giants didn't know where the minotaur could be. Vanguard asked if there were any other troubles the Desert Giants were running into. The Desert Giants mentioned their hunters were having trouble moving around the nearby ruins, mummies plaguing the area and were needing assistance clearing them out.

As a squad, Vanguard insists on helping them and moves towards the ruins. Jixie debriefs the squad on the details about mummies. She warns the squad about Mummy Rot, a curse and disease that spreads across one's body if they make physical contact with them. As the squad moves into the ruins, mummies started climbing out of the ground and moving sluggishly towards the squad. They took out the first few mummies with ease, but as the squad started closing in on the center of the ruins, a realization started to sink in. More and more mummies started coming from every direction, surrounding the squad.

Ryder and Mel were doing their best poking and prodding at the mummies in the frontline. Augusta and Liang were sweltering, being Frost Giants in the sizzling Abaguan sun, rapidly losing concentration by the seconds. Jixie was steadily moving around the mummies, taking shots and putting them down. And Zack was carefully running around the squad, making callouts and avoiding contact with the mummies.

In the beginning of Year 3, after training at the encampment behind the mountains near the Academy, Jixie received a package from the fairy mail. She asked the fairy where it was from and they couldn't recall. Only that it was from a "secure location" with no name or address attached.

When unboxing the package, Jixie came across a small black notebook. She opened it to the first page and she instantly recognized the signature. It was one of the very few words in the book written in common. The others being a small poem on the last page. From the wide variety of journals Jixie has read on the author, she knew the book was written by her mother.

Jixie was puzzled. If her mother sent her this book, how would she know her daughter is alive and attending Ascension Academy? Jixie had zero communication with her mother growing up as she disappeared from the family while Jixie was still an infant. Jixie assumed she was dead, and she may very well be. But there's still a chance she is still alive. Her father kept some of her mother's journals with him, letting Jixie read up on them over the years. With what she's read, it seemed her mother cared little to none about her family and was content with her decision. She also learned her mother was a necromancer and a controversial one at that. ...

Jixie started flipping through each page of the book and realized it was filled with geometry, graphs, sketches, sigils, keys, and calculations all relating to magic. Sadly, most of the writing in the book was unrecognizable. No one on campus seemed to have any clue what language or code it could be. She found this rather unusual and after asking Professor Albrecht, it became a possibility that this book could be extremely old. Jixie later noticed the book had segments sewn into it. The segments relating to magic seemingly came with the book and the sewn in parts resembled and wrote like a journal. Meaning, it was passed down through generations, partially confirming Albrecht's hypothesis. In addition, Jixie, using her "mana sight," could point out the book was magical in nature but didn't know what kind. By doing this though, it strained her head and eyes, even when she wasn't concentrating her sight on the book. 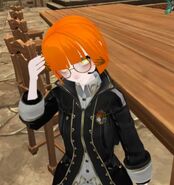 One of Jixies mechanical constructs, Rusty. 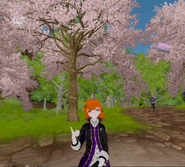 Jixe at the begging of year 2

Jixie at the Duat desert 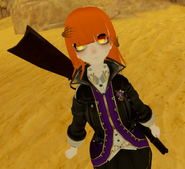 Jixie with her new arm

Jixie in the pumpkin carving event

Jixie and Zack in glamour Day

Jixie worried about his squad 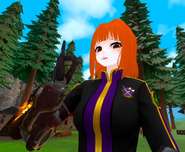 Jixie judging you
Community content is available under CC-BY-SA unless otherwise noted.
Advertisement