Not to be confused with: Jimmy (Disambig)

Male
Jimothy is a young adult from a middle class background who had recently flown the nest for the first time but somehow ended up in the Row.

Having settled he has to navigate his many problems while finding his way in a world that seemingly wants him getting horribly and violently murdered.

Last year Jimothy Young was a newcomer to the Row, bright eyed and hopeful. He was recently given the role of Bank Teller and was ready to do his best.

Originally living in one of the more suburban districts in Salvation City where he had a relatively peaceful life in an enclosed neighborhood. His parents both worked for The Galactic Union, and Jimmy followed suit after them. To his misfortune, he was designated to work in the Row, despite being confident he could have reached a better position. In any case, Jimmy has now flown the nest to start work at his new job.

Now he makes do trying to get through daily life at the Bank in one of the most dangerous areas in the city. 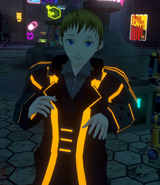 Working at the bank, serving Rivett and Faye 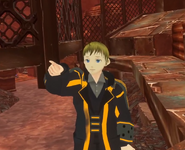 Attending the Thunderdome in Scrap Town for an arena match 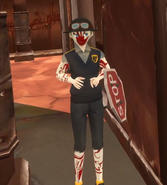 Jimothy with ripped clothes and painted