Not to be confused with: Jeremy

Jeremy Isabelle Beaumont is an Ex Corporate guard turned runaway. He serves the wasteland as a general handyman. He utilizes several oversized tools to fit his above average strength. He is a fairly selfless man and goes out of his way to aid people he feels needs it. (Just don’t ask him about his middle name, it’s a sensitive subject)

Now that he has seen firsthand the evil deeds of the mega corporations and escaped their clutches, Jeremy is looking towards aiding in the escape of more corp workers. He's earned his freedom and is determined to pay it forward by allowing others their chance. But his childhood dream of becoming an entertainer could interfere with his new mission. After all, sometimes dreams do become true. 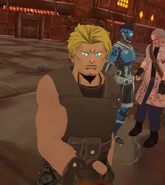 Jeremy greeting Sten, with Speedracer and Zax Prowler in the background 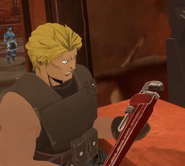 Jeremy and Batharra at the volcano