Jarvis Bellworth lived in the Row for a time, completely enamored by the towering buildings that walled his place of living. His health was in poor condition due to a disease rendering his body frail and deteriorating, and his only shot at saving it would be saving up enough money to be able to afford medical treatment and/or augmentation. “Where does wealth lie in the Row?” Jarvis would ask himself, until he looked the one direction that often occupied his daydreams: up.

Jarvis begged and pleaded with many of the corporations, explaining his ailment and need for employment. All but one corporation threw him to the curb, NIRVANA. The corporation agreed to give him a starting position as an assistant, given one caveat: He must agree to experimentation and study of his health. Jarvis accepted with no hesitation, given he might be dead soon anyway. After receiving the opportunity, Jarvis put every last drop of sweat into his work, putting his developed people skills into action.

Although he had success in his work, Jarvis was not able to outpace his health and he fell into a critical condition. Jarvis would’ve died then due to his disease, if not for NIRVANA, who weren’t quite done with him yet. Given his agreement, NIRVANA performed one last experiment: encasing Jarvis’ brain in a glass container filled with a preserving and data-transferring liquid. They attached monitoring cameras and a robotic body for interaction with the outside world, giving him yet again a somewhat human resemblance. Though rough at the start, it was a success. Jarvis’ life was saved by NIRVANA, giving him an overwhelming feeling of debt to the corp for their extreme showing of “kindness”.

Now Jarvis has worked his way up to the position of Manager of Public Relations, entirely focused on the betterment and success of the corporation as a whole. 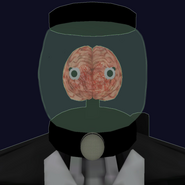 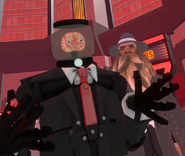 Jarvis and Dr. Lorn Barnes
Add a photo to this gallery
Retrieved from "https://vrchat-legends.fandom.com/wiki/Jarvis_Bellworth?oldid=88122"
Community content is available under CC-BY-SA unless otherwise noted.