JakenBakeLIVE is primarily an IRL streamer on Twitch who started streaming VRChat in November 2020 often visiting The Golden Gator.

A short time after he joined VRChat he was able to get The Yishai as his personal mute, mainly due to help from Java and from offering her a slot in the Project 30 World of Warcraft raid stream group. This is the same raid group that included other members of the Gator RP Group including Roflgator, Sodapoppin, Qynoa and many others.

He spent his first week in VRChat mainly using desktop mode but was able to quickly procure an Index and as of Nov 13th 2020 he has been streaming VRChat in full VR. He purchased the gear to have full body in VR on Nov 19th 2020.

A common joke in Jake's chat is that he is already Stage 5 according to VRChat progression but there is currently no official defined stage for Jake. He maintains that he is at most stage 1.5, but it is unclear what his actual stage is.

Together with his personal mute Yishai they pioneered the personal mute meme to the next level when Yishai's 3D avatar was overlayed on Jake's IRL camera on Nov 24th.[1]

On Nov 27th he invited his dad to play on his account in VR who was introduced to the other patrons at The Golden Gator 2020. During his visit he got introduced to mutes, the succubus Blu Haze and was tricked to believe that Cyr and WillNeff were a couple.[2]

Nov 30th was the first time he was seen switching to a female avatar.[3]

Together with his personal mute he has has popularized various mixed reality "metas" with Yishai overlayed ontop of his IRL live streams[4] working out and later chilling in hot tubs.[5] 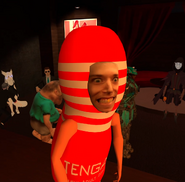 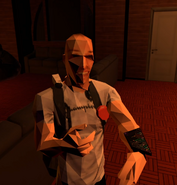 Low-poly self with PS1 graphics 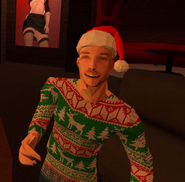 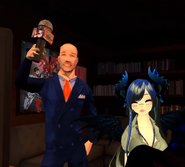 Promoting a soda sponsorship with Qynoa 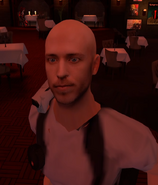 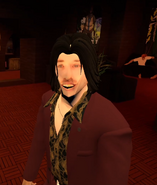 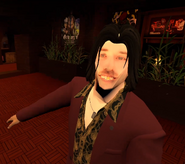