Male
Jack 'Splice' Montagne was a Cyberware mechanic by day and a Decker and "Better-Than-Life" - BTL chip dealer by night. He ran a cyberware repair shop in Callous Row, the underbelly of the gigantic Savior City.

BTL's also called "Dreamchips" is a cybernetic extension implant that grants the user a virtual reality mixed with hallucinogenic stimuli, often pre-programmed with experiences they are similar to drugs but interfaced directly to the users brain.

Earning up to his profession he was good at making things work in ways that they were not originally intended to, was established in the community and knew about the local street gangs as well as having a natural affinity towards coding.

A child of the Savior City streets, it was only a matter of time before Jack's natural talents for the mechanical and the digital would land him squarely in the seedy underbelly of Callous Row. He got his start in Cyberware at a chop shop, recycling parts and limbs for the local gangs and mercenary crews in the bottom rungs of the city. Over the years he made his way through the ranks, to the point where he could begin Shadowrunning himself, offering his services as a Decker. Wanting to break free from the scum of Savior City, he contacted a black market contact of his. A BTL Programmer named Hex who offered him access to their supply line and enough funds to get started, in exchange, Jack would have to deal their supply of cyberdrugs to the people of Callous Row. He readily accepted, and begun plans to open a cyber-ware dealership.

After the quarantine was lifted he visited "The Grindstone", a bar run by a half-orc named Rook. After introducing himself he listened into a conversation between the proprietor Rook and a local politician and civil servant in a suit named Coach Eric. Keeping to himself, seated at a nearby table he overheard Rook striking a deal to figure out the location of a certain package belonging to the Quixote mega corporation.

Working at his shop he met a strange vigilante referring to himself as "The Sheriff". After the vagrant caused a ruckus and almost urinated right in the middle of the store he managed to shoo him out. [1]

The following day Rook directly asked him to meet up for a business proposition. Along with an orc named Charles Rask and the short but battle ready Street Samurai Angelina Greasepalms he was offered a job to rob the Mars Corporation patrol. Along with the crew they were hired to recover the contents of the patrol to any cost necessary. The items being moved he was told was some kind of ammunition. He agreed to the task.[2]

Having employed Duncyn Kuiper he had to recover a 5000 credits worth mechanical arm that Duncyn parted with way too freely. Duncyn manning the cashier had accepted a measly 35 credits with the rest as an I-owe-you to Bethany Esda. Luckily he got it back without any issue.[3]

He assisted in a robbery against Mars corporate patrols, retrieving some kind of magical bullets for The Shattered Legion, led by Rook. The operation was successful with no casualties on their side but since his participation undoubtedly has the eye of the corporations on him.[4]

Fleeing from a corporate droid hunting him for his data tablet he managed to corner it next to a garbage chute by throwing his tablet into it. When the droid turned around looking for the tablet he shot it in the back as it fell down. Investigating how far the droid fell and to retrieve his tablet he was pushed in by Ais.

Breaking his legs in the fall he was moved screaming to the hospital by Ais and Duncyn to be treated by Dash Spacer and Cap Fawkes. Screaming rude words and panicking, Duncyn tried to convince the physicians to put Jack to sleep for "hurting his feelings". Jack was then wheelchair bound for a time recovering. [5]

While at the noodle shop a strange armored individual entered asking for information and claiming to be "a traveler". Offering 1000 credits Jack was interested enough and followed them, alongside Rana and Dagu who led them into Ryders garage. There the armored individual admitted his allegiance to the corporation Quixote and told the three that he was looking for a leader figure of respectable variety, someone that people look up to. Rana, opening her mouth let go of the information that he was probably looking for Rook. Jack facepalming reacted quickly and as soon as directions were asked he pulled his firearm and started peppering the mercenary with bullets, remaining loyal. Too late unfortunately because the mercenary managed to escape.

The respite was short lived as thereafter armed corporate goons issued a lock-down and came down to slums, ordering people to go indoors while undoubtedly searching for Rook. Before they managed to locate their target or cause any harm Jack together with Rask and Talus bravely went out guns blazing and dispatched them.[6]

Having emplyed Becky to be his informant she provides him with valuable information and intel on what goes on in the Row.

She tells him of Athologoths invention "hard-light". Jack asks him about it and ends up getting cornered by him as well as Talus Nova. Speaking to them he learns that they together have been working on developing his "Hard-light" technology, a material toxic to humans to be usable in weapon grade materials. Being the only one able to handle it safely Talus has used his body to recharge it, making it weapon capable. As a Novakid his body consists of materials from stars.

Jack suggested that they should sell their invention but both Athol and Talus refused profusely, feeling insulted. They reasoned that this was not be sold but used by The Row to achieve their own goals. Agreeing to keep it between them Jack was let go.[7]

Following a hacker (portrayed by Arcadum) targeting Alfons he fills the clinic with gas. A.L.Ex. together with R.G.-2 enter and stop it.

The hacker seeks revenge on A.L.Ex. by tricking her beloved Desmond. He lies, tells Desmond that she is in danger and has to enter a holodeck in order to save her. Instead he is locked inside by the hacker, seemingly left to die of thirst or starvation.

Jack is made aware of the hacker through his decking monitoring software, enters cyberspace and locates Desmond. There the hacker addresses him as "Slack Jack" offers him a deal and presents himself as "Caspian 65", first 20.000 credits, raised to 60.000 - in exchange for leaving Desmond to die in the digital trap. Jack knows this person from before and refused the offer, engaged with the hacker in a "hacker battle". Jack winning expresses that he has little care for much in Callous Row except money, but sticking it to the mega-corporations means more to him and someone working for them is an enemy, regardless of them having a shared past. Caspian 65, perhaps remembering something he once shared with "Slack Jack" gives up and leaves them. Desmond is rescued.

Jack meets the synthetic slave trader Vart who introduces himself looking for synthetics. Playing along Jack offers to bring him some synthetics. The trader offers Duncyn 100.000 credits in exchange for purchasing an original model Guidebot but he refuses even when the offer is raised to 150.000. Vart also catches a fancy for R.G.-2, wanting to purchase him.

Angelina Greasepalms cornered Jack and accused him about selling out synthetics as she had overheard him talking about it as well as missing her synthetic friend Alana. He denied the accusations and was let go. His reasoning was to get the slave trader out of the system peacefully without the bloodthirsty locals solving everything through violence. Having another talk with Vart he convinced him that he would try and get him some synthetic but that he needs to pullout soon if he wants to avoid violence.

Looking after the synths interest Jack runs around getting Duncyn to hide away guidebot, Desmond to hide A.L.Ex. and warns others to keep their head down from the slaver. Loosing the whereabouts of his potential merchandise Vart eventually leaves without any synths.[8]

During an incursion of Shadowbat cultists making their way into the Row, searching for Alfons and capturing Loch he was fatally wounded when he intervened, trying to rescue Loch. Being moved into the clinic he was treated by both Cap Fawkes and Celeste but sadly his life was not possible to save. (Out-of-character Arcadum rolled dice to determine his fate, sadly they did not favor him this day)[9]

After his death an automatic recorded message (a deadman switch) was sent to Duncyn wishing for him to watch over his shop, hoping his death was fighting the corps or doing something noble or heroic. He also set aside 100.000 credits to help Duncyn get the shop going.

"Juryrigger" - Jack has an intuitive grasp of the inner workings and underlying principles of mechanical and electronic devices. He knows how to repair the broken, rejuvenate the worn, improve a device’s efficiency, or coax it into doing things its designers hadn’t intended.

"Street Politics" - Jack knows the street gangs, the criminal operations, and the beneath- the-surface affiliations that are the social and political fabric of Callous Row, allowing him to strike deals with both sides of gang conflicts.

"Codeslinger" - Ones and zeroes are practically a native language to a Jack. He is adept at performing a particular set of Matrix actions better than the average hacker.

"Data Liberator" - Some would say you’re fighting the good fight. Others would sneer that you won’t last long in this business. And yet many more would kill you on sight for what you’ve done. Jack is compelled to give away for free any gained paydata, intelligence, or secret from any mission he performed. Jack simply disseminates the data to news outlets, shadowrunner data boards, etc. To anyone who will listen, really.

"Simsense Vertigo" - Jack who suffers from Simsense Vertigo, experiences feelings of disorientation whenever he works with augmented reality, virtual reality, or Simsense.

"Bad Rep" - Jack's cyberware has a pension for breaking down and needing constant tuneups and repairs. This has earned him a mild rep as a untrustworthy salesman. But hey, where else are you gonna get an arm in this town? 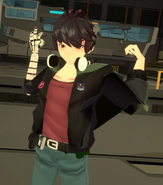 Jack working in his shop

Recruited as an informant by Rook

Changing locks on the package with Angelina Greasepalms

Being treated by AIM-3, having been wounded in the robbery.

Jack and Felix Dolore in the Shattered Legion secret base.

Meeting a mercenary offering a reward together with Rana and Dagu.

New customers at his store.

Getting a blood sample from Akeena to help Charles Rask get more information about her species and language.

Apologizing to Akeena for taking her blood sample.

Hit with a logical tracking bullet by a corporate assassin.

Injured Jack is moved to the clinic by RG-2 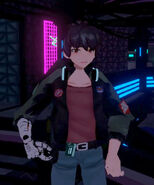 Jack in The Grindstone bar 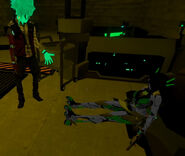 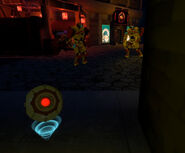 Slaver Vart remote controlling a spybot, with his armed guards. 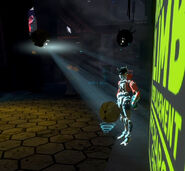 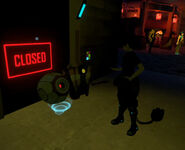 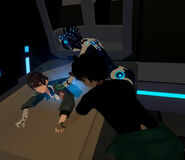