Isaiah (ai-ZAY-uh) Clark is a troubled veteran space engineer who runs the "Clink 'n Clank" down in the Fire District. He's the maintainer who helps to keep a lot of the Undercity together by not only visiting each shop but also helping the people if the Street Sams are away. He normally goes by "Clark" due to his military history and the fact that people keep saying his first name wrong. He is a normal human with no augmentations outside of his engineering suit and his handy-dandy plasma cutter that he tends to on the daily.

Isaiah was one of the only survivors from the Tal Volantis incident. He has been left with mental scarring from the shadow magic that was used to claim the dead rock. He now keeps himself away from shadow magic as a whole and uses his work to keep his mind off the horrors of the vile art. Sometimes he cracks and will write graffiti of the markings that appear in his head, but only rarely. 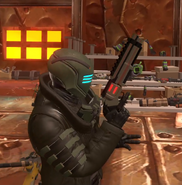 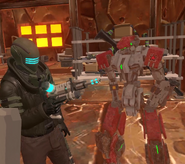 Visiting the smithing shop of Scrap Town, speaking to the smiths Patches and Sten
Add a photo to this gallery

Retrieved from "https://vrchat-legends.fandom.com/wiki/Isaiah_Clark?oldid=96588"
Community content is available under CC-BY-SA unless otherwise noted.