Irinarya is an absent minded High Elf from Aldoria who attends the Ascension Academy as a student. She is now known as Lianda Xel Heinrich.

Irinarya grew up in an orphanage. She once made a makeshift bow to practice, but she accidentally killed a cat. Seeing her love of archery, her orphanage gave her a proper bow and arrow to practice with. She then went on to enter archery contests. At one of them, a Kingsguard scout was watching and scouted her.

During a mission before the academy, she accidentally hit her friend during an encounter with Wicker Beasts, hence her fear of them.

Irinarya was introduced as an exchange student to the rest of the attendants on the same day as the Academy library was reopened. She asked Eldrin if he wanted to be her friend to which he said yes, and considered him to possibly be her best friend among her peers. Talking to Chipz she was asked to rate some fellow students on their looks and she ranked Eldrin the highest.

She snuck away together with Chipz and left the campus grounds during introductory classes. They were eventually caught by a river-side beach by Headmaster Kareeda Akiyama in his Treant form. They were not punished but he would considered handing some out at a later time. [1]

During a rainy day, Speca agreed to give her a reading on her fortune. They went to the top of the bell tower located at the library and began the reading with a crowd of people listening in. Most of the fortune went smoothly as she answered Speca's questions, but at the very end of it, Speca quickly had headaches and started to act erratic. Speca stated that a certain card wished to talk to Rin. The card said "I joined you when your journey began. I will be there in the end. I escorted many before you, and I'm neither enemy nor friend." This left Irinarya distraught as she left to the lower area of the library. Eldrin went with her and comforted her afterwards.

After becoming close to Eldrin, 'Elly' - the nickname she chose to give him, decided to make a flower crown for her. Replacing her original hair accessories, Rin wore it with pride while Eldrin enchanted it in the library, enabling it so that it wouldn't wilt. This was up until an encounter with Melanie led in to her burning it off Rin's head out of anger.

Upset by this, Rin found confinement within Barthall due to Eldrin's absence. Feeling bad, Barthall decided to go around the Campus, collecting his own set of flowers for Irinarya to form a new crown.

Her sickness got immediately worse when Professor Von tampered around with potions in order to find the cure. Rin became visibly and physically ill, gaining dark circles around her eyes, speaking slowly, and lost a lot of her energy. Professor Von states that although her condition got worse, this may also help him find the cure faster.

During a talk with Vevina and Victor at the cemetery, Rin confided in them and told them of her past friend. She used to have a dear friend that she valued. On the battlefield before she went to Ascension Academy, her friend got hit right next to her. Rin froze up while he bled to a slow death and couldn't move. Rin blames herself and her lack of action as the reason as to why her friend died.

Before Rin left the cemetery, Victor recited a poem that reminded him of her. It goes "I curse my stars and bitter grief and woe, that made my love so high and me so low." He then goes on to state that the reason her friend died was because he was weak. Rin left shortly afterwards.

Esmae stated that Chipz and Rin look like siblings, and so from then on they consider themselves as brother and sister.

Esmae and Rin jokingly kissed, then right after had an argument/dance battle with many observers. They were close friends who often had sleep overs until they had a fight about Esmae's weight during dinner.

In her drunken sleep, during the desert mission, she calls Professor Albrecht her Dad. Later on, she confesses to him that he reminded her of her old lieutenant, her late adoptive father. Then Albrecht surprises her with official adoption papers before their trip to Aldoria, where he also takes her to his old home.

Rin suffers from a disease called Elderbloom, which left her body in a very weakened state. Rin suffers a fatal wound from a Blackguard during a mission in Aldoria, and combined with Elderbloom, she only had a few hours left to live. The Aldorian medics and Captain Skybeak were unable to stabilize her due to the Demonic nature of the blade continuing to bleed her out. However, Victor had promised Rin before to turn her into a vampire only when she is at death's door. Fulfilling his promise, Victor takes her to a nearby cave to turn her into a vampire.

During her vampire training with Victor, she kills a young child, which was the one thing she promised not to do after she turned. She realizes the girl who she once was, Irinarya Sungrove, is dead. She decides to change her full name to Lianda Xel Heinrich. 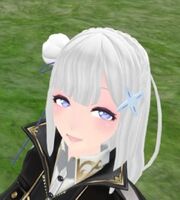 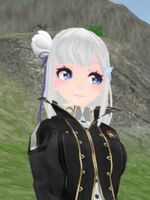 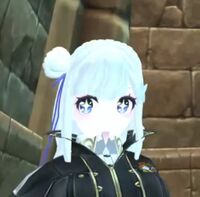 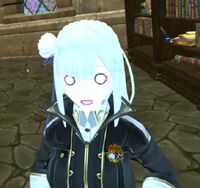 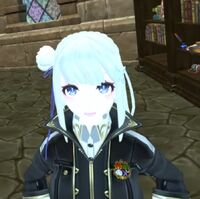 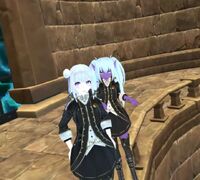 Irinarya and Melanie, daring Chipz to jump down the library bell tower. 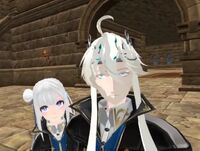 Rin after pushing off Victor

Victor pushes Rin and gets revenge

Rin in the Crypt

Rin shooting to the Dryad

Rin at the Hart Ball

Rin at the beginning of 2nd year

Rin and Lila with nets

Rin with a bandaid

Rin signaling Aldoria in the world map to Chipz

Rin in her bat pijamas

Flora and Minerva taking care of Rin during the third Camp Cari mission.

Rin trying to choose the team for the library visit

Lianda and Victor rebinding to the barrier

Lianda being followed by the headmaster elemental

Lianda in the water caves after discovering the sap blights

Lianda arguing with Hannah after the dungeon got flooded 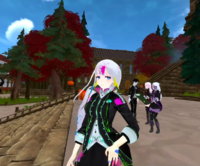 Lianda sitting on Timmy's well before getting pushed

Lianda and the students summoning Timmy

Lianda in Return to Duat above a worm aiding with range 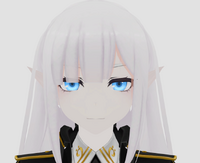