The Illithari is a psykinetic alien race with blue skin, milky eyes and tentacles where their mouth should be. With chameleon like abilities they can camouflage and assume the shape of other humanoids.

They are very agile, can jump many times their own height and with natural adhesives they are capable of scaling buildings vertically.

Reminiscent of a "hivemind" the aliens have capabilities to communicate via radio waves similar to synthetics, possibly also ultrasound or telepathically. If they're organic, cybernetic or magical is a matter of debate but possibly even a combination of all three.

If they are a form of the Illithari aliens, a symbiote related to them or a product of their creations is not known, but they appear to be sentient black amorphous blobs that grow by consuming nearly everything. They have been seen infecting multiple spaceships all over the system. Following infections the ships tend to crash and leave no survivors, as all aboard are consumed by them.

In Season 2, they silently invaded the Evenaris System and the planet Hellion, home to Salvation City. Turning detector satellites and weapons against themselves at first only the Valkyrie corporation knew about them but the knowledge of their threat quickly spread to the rest of the corporations.

A sample of the aliens was located onboard the crashed spaceship The Golden Lance, now destroyed. Another sample crashed in The Upper City and was eventually torched by Valkyrie. When Avalon researcher Alice Constantine got to scan a sample of them, their complexity shocked her and looking at them she realized that making sense in understanding these beings would require a whole new science of research - potentially a decade or even a lifetime of work.

The TraVerse fleet stationed around Hellion was sent to engage the approaching Illithari invasion fleet but half of the ships involved in that effort were destroyed/absorbed into the Illithari fleet, strengthening their numbers. The rest were forced to retreat or they too would be absorbed.

An Illithari scout landed in the Upper City alone, and using the race's ability to absorb and shapeshift into those who they meld with, took the forms of a Avalon guard, Razz, Leonard and ultimately Goldman, newly elected President of the Board. Using his authority the alien was able to access the Traverse warp gate codes and force it open for the approaching fleet. Goldman was not fully absorbed, Reynolds was quick to act and chased the creature off before it could finish taking his form, but the damage had been done. Goldman issued a global broadcast to alert the residents of the Upper City that war was upon Hellion.

An armed Illithari scouting party descended upon the Upper City early in the morning. Unprepared for the sudden incursion and the incredibly powerful weapons the aliens wielded, numerous corporate personnel were gunned down before a global alert could be issued. A full-on firefight involving HTR teams and dropships ensued in the Avalon plaza outside the clinic as the aliens attempted to gain access to the wounded who had been brought there. Powerful magic appeared to be the only effective defense against the alien weapons and the clinic had to be evacuated under a shield set up by Damien.

The aliens took the opportunity of an unguarded Avalon and the incapacitated Emilia they had captured to gain access to the Lazarus Program using her credentials. A global alert issued to all the executives in the Upper City, and they quickly rallied a force to take the Avalon lab back. The ensuing close-quarters firefight led to the death of the appointed general who was to lead the fight against the invasion, Leonard Kiani. However the effort was not entirely in vain as the Lazarus Program was saved.

The aliens were chased out of the Upper City and descended upon the Row, which had been preparing for their arrival, most residents holing up in the Dirty Diamond with supplies and weapons. The aliens managed to breach the shutters but retreated and came in through the second entrance. A full-blown firefight broke out as the aliens ran wild through the Diamond shooting and maiming as they went. Eventually they fell back, sealed the shutters again and began to flood the Diamond with poison gas in an attempt to force the slummers out. They waited to ambush, but the slummers were able to force the aliens into a retreat as the group moved to the clinic together. 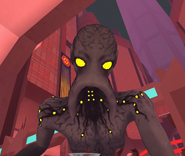