Ikaruga Mitsuyami is the lead public relations official for the Quixote Corporation on Corvanis 3.

She attended a meeting between the Mega-corporations, planning to fill the recent void following the lead president's disappearance. She invites each and every corp to attend a gathering that shall be held in a few days.

Ikaruga's aforementioned gathering takes place in the Quixote courtyard, bustling with attendants from every corporation and a few key individuals from The Row that have +1 invitations from their corp friends.

The party seemingly goes well until there is a shrill screaming heard, which Ika finds out is from her companion BR-16 who upon investigation is ripe with malfunctions and keeps looking towards the sky as if something is approaching.

When Ika attempts to touch the glitchy AI, her computer dings as a strange file has been sent to her, that lets her see from one telescopes of the mysterious off-world "Eden". The telescope sees a "black and red haze approaching" and "creatures not quite human, tendrils for faces".[1]

Right after being informed of this possibly world-ending threat Ikaruga gets contacted by a disturbed man who informs her that Quixote is being hunted, before promptly being assassinated right in front of her. 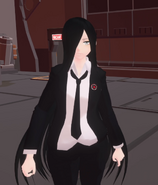 Meeting Kee'ra from The Row

Trying to communicate with the malfunctioning BR-16