Human
(what little remains of him)

I Ma A Ekatsim, or Ima for short, is a heavily cybernetically enhanced human. He helps run the car dealership and rental business, "Ront and Co's" garage in Scrap Town together with Batharra Ront and Toolbox.

Ima was once a simple musician and shopkeeper of a general store somewhere in the inner parts of Salvation City.

But in a crime filled dystopian city, with little care for human life, easy lives never last long. He was one day taken by a cybernetic obsessed cult that wished to fix humanity's imperfections and change all flesh to cybernetics. Being used as a subject for self growing cybernetics he had most of his body replaced against his will, but gained some interesting features in return. As someone with a high constitution he was kept and sent around as a demonstration piece, for educational purposes in the cults schools.

Eventually the cults experiments ran into total mind failure, caused a big scene in one of their labs, leading to the escape of many of the still subjects who were still sane. This was when Ima managed to get out as well. With his memories scrambled, he's only able to remember half of his life after being repeatedly being dissembled, assembled, poked, tested and rebuilt like some puzzle.

Not knowing what to do with himself, with half of his body changed more than he can remember, he clinging to his last bit of remaining humanity by trying to find out what happened to his original body-parts. His heart especially. Making his way down to the wasteland, the place where all who are rejected by the city go, he was able to find a new start.[1]

Having lived in Scrap Town for over a year, learning to understand the limitations and potentials of his body, he made friends and some enemies. Managing, but proving that an easy life is not something he'll be able to have anymore. 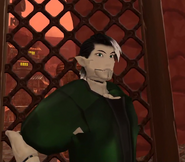 Before fighting in the Scrap Town Thunderdome arena versus a synth 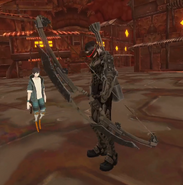