Now designated IS-01, formerly known as P47-CH35 (Prototype 47: Combat Handler 35) or "Patches" is a refurbished Quixote Corporation prototype synthetic who operates as a blacksmith in the Wasteland. He primarily scavenges and forges items to sell, craft into weapons, or make parts needed for repairs.

Patches and his mentor were making their way to Callous Row to start an official business together, but after the tragic death of his mentor, this dream never came to pass. Now he operates outside the city limits in a competition between himself and the memories of her work on who makes the better product.

A pillar of the community in Scrap Town, Patches was known as the dutiful blacksmith providing the town with invaluable services. In the smithy "Iron Designs" he recycled useful scrap metal brought in from the local scavenging crews, turning it into building materials and all kinds of weapons, armor and implements. Handling the tougher craftsmanship his colleague Sten in the smithy handled the finer details such as gunsmithing.

His trust would eventually come into question after a terrible incident when an ancient A.I. known as "Titan" hacked and commanded all synths in the town to follow his bidding. Patches lost control of himself and in following Titans orders he wounded many leading to the death of several townspeople. While not at fault he was still blamed for the actions, especially by Trey Hunter. He had his emotional folder reinstalled by Mr. Prowler the roboticist and suddenly in touch with his emotions Patches decided to leave Scrap Town without notice. Feeling unwelcome he returned to his creators.

His chassis replaced and upgraded by Quixote he was stationed back in Scrap Town as a guard. A message sent out to the council members, they were informed that he was to be stationed there to keep the town secure against potential dangers. Exactly what that entails is uncertain.

Traits before being rebuilt by the Quixote Corporation when he was known as Patches. These no longer applies. 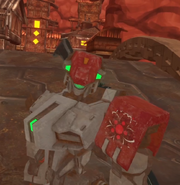 Receiving a "blessing" from Sheila 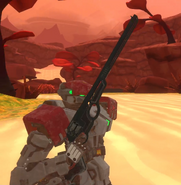 Shiloh sells scrap to the smithy

"Following the path to Eden"

Pepper blocks the way to Duncyn, standing in front of the Synths having turning hostile under the influence of titan

Shaking hands with BR-16 after she got a body

Getting a deadset glare from Trey Hunter, during Peppers and Ashs funeral 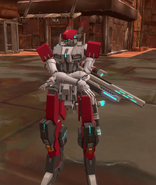 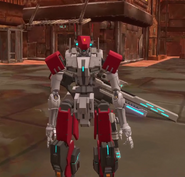