Horizon is an augmented human that was a normal child from a regular family. One day their family was killed in a corporate shooting because they were ex-Union rebels while they weren't home. The family caretaker synth was programmed to protect and teach them. After the slaughter the synth and the kid were able to survive, taking their fathers cyberdeck and ID.

After a couple years the two had moved to a small planet that was also being destroyed by various corporations. While there the kid became rebellious, attacking other kids and protecting synths, learning how to use their cyberdeck to try and keep them operational. This caught the eye of Shepherd SpineCrusher a Half-Orc ex-Union Sergeant turned mercenary, Shepherd went on to take them under his wing, and in the kids teens they had become fairly decent at fighting and decking and truly took in the name Horizon becoming a shadowrunner.

A few more years passed and the synth started to go haywire, malfunctioning and killing Shepherd but not before being taken out by him before reaching Horizon. Scarred from the trauma, Horizon created a mask to hide themselves and a new persona to hold themselves together. They made an oath from that point on to protect and help synthetics, as well to do as much damage to any corporation as they could.

Moving away from their planet after it was fully stripped by corporations, Horizon moved to Saviour City to do mercenary work as a street samurai. There Horizon caused small issues here and there to the corporations, and got enough resources to create a small shadowrunner group to steal some corpo tech, however the heist itself went wrong, leaving everyone else to be slaughtered and Horizon barely standing. After the failure they moved down to Scrap Town with all that they had and began anew again.

After Scrap Town councilman Henderson McCuldger learned that their radio is compromised and spied on by the corporations Horizon was tasked to aid in setting up a new communications network. 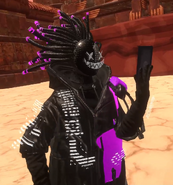 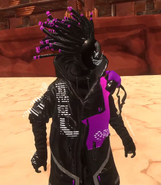 Speaking to Henderson about upgrading their comms 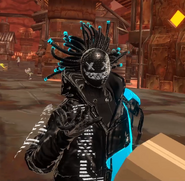 How can you refuse an offer to have your broadband upgraded from this one? 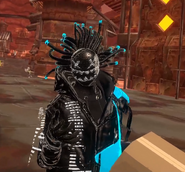 Horizon Injured inside the wasteland client

Horizon in their darkest moment.

Horizon Killing the Data Wraith to save Vee