Henderson "The Immortal" McCuldger is a longtime human resident of Scrap Town, born and raised in the wastes to a band of Nomads called the Salvagers. He has survived through more than what most people will see in their whole life. He owns and runs the Scrapatorium Scrap Yard, the Arena in Scrap Town, and acts as one of the 3 mayors in Scrap Town; Representing the Scrappers.[1]

After recovering from a devastating head injury that made him lose his sanity and most of his memories, Henderson is left in a constant struggle to maintain control of his own body against his counterpart McCuldger, a violent and belligerent psycho. Both trying to ensure the safety independence of Scrap Town.

In Episode 5 he was elected as one of three representatives of the town council together with Ash and Sean, replacing the former Mayor Rico Suave.

After being captured by a synth A.I. named "Titan" that led an uprising of the synths in Scrap Town, he and all the other captives were healed using it's powerful nanites. While healed of his brain damage and madness it inadvertently had severe effects of another kind. Previously having been oblivious to pain, having a powerful metal press grafted into his arm as well as regularly consuming toxins he was hit full with the shock of being suddenly aware of his terrible state. Since his change he, for now at least, is no longer able to manufacture firearms from scrap, which will be a huge loss to the town. After returning he had his piston metal arm removed by Savire Vay, a new medical practitioner at the hospital.

No longer the same charming madman that he once was - he now seems to be a troubled soul, suffering from his painful memories. Although now calling himself "Henderson" and rejected his former self "McCuldger", it still remains in some capacity in the back of his mind, gnawing at him. 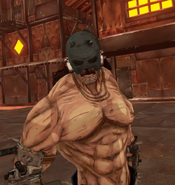 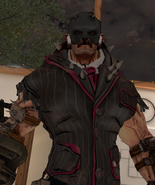 Speaking to Panther, one of his old tribe members?

Speaking to Bjorn the Bear, one of his old tribe members?

Walking in on the synths during the Titan uprising

Firing at the synths who lost control

Returning with the synths after Titan was disabled 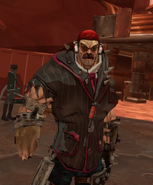 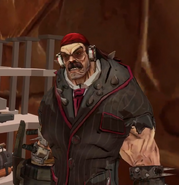 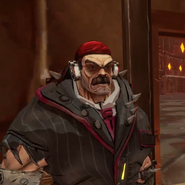 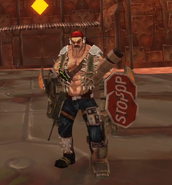 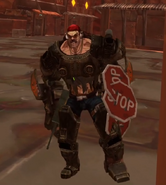 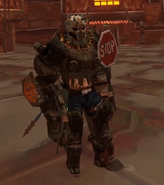 Henderson and Savire speaking to Sten 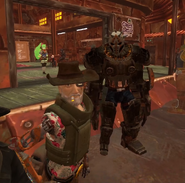