Hawkins Sawyer is an Upper City operative, working under the Atlantis corporation.

Recruited by the Atlantis Corporation at the age of 17, he went under extensive combat and mental training. After 3 years of this, he was enlisted onto a sleeper agent program, but a mistake lead to him being released too early and subsequently being lost in the wasteland of Corvanis 3. He lived out the next 7 years, 256 days as Trey Hunter, a treasure hunter and scrapper, and in the last couple years finding a home within Scraptown. 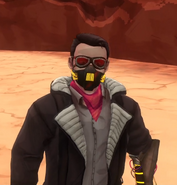 Trey Hunter with his goggles, 1 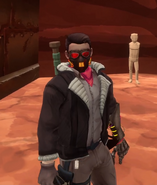 Trey Hunter with his goggles, 2 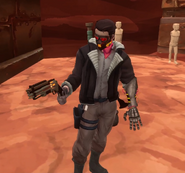 On the shooting range