Blue (Dyed Silver)
Hatsune Shinohara is an augmented human working for Talaris. While originally a decker fallen into Callous Row, with the help of Coach Eric and the release of Beth Esda’s vlogs she was able to get an internship set up with ATLANTIS. Now having climbed the corporate ladder to a lofty position in the Upper City, Shinohara fears falling back to the slums below, disappointing herself and her family. Despite her kind outward appearance, Shinohara won't hesitate to sabotage virtually anyone in order to further her own agenda of ascension. She later defected from ATLANTIS to join Talaris as an undisclosed position.

Previously she was employed by Rebel Ryder as a decker, but mainly worked as a Teller for Coach Eric at the Bank. Becky taught her the ropes as well as customer service, and often guided her about the Row, with Shinohara gently speaking of different views where appropriate.

She is played by Miss Yamato. Next character: Diana Knighton.

Shinohara grew up in a large family in Savior city. Her parents were both office workers, so the income was nice, albeit a little stretched among all of them. Being the youngest in a family of 6, Shinohara has always been wanting to prove herself in the eyes of her siblings. Whether that’s getting good grades, or scoring the highest in a video game, she wanted to stand among them proudly without being the runt in the litter. Fascinated with mechatronics in high school, she started delving deep into decking. The idea of what makes things tick was appealing to her, and there was so much potential to be tapped into with the Intranet. And she could use that potential to greaten herself. But here she is now, sitting in a small apartment trying to get by. Shinohara can’t dare return without making a name for herself, or it’d be betraying her goal.

Her parents named her after Hatsune Miku, which she will deny if asked. She instead prefers to go by her last name.

Shinohara went to the Bank to both deposit credits and purchase an apartment to start her research. She met Becky, who gave her a tour of the Row. She quickly gained a negative reputation for being associated with Banker.

She later asked Coach if he was hiring, and scheduled an interview with him.

Shinohara stole parts from Duncyn's shop to build card skimmers, and installed them in the bank and the convience store.

She later had her interview with Coach, but was interrupted multiple times due to the kidnapping incident. He later sent her off to shadow under Sharborough. He then left her with A.L.Ex. and Desmond, where they mistook her for a corporate member trying to sell slummer information.

Shinohara broke into and stole parts from Beth's shop, building more skimmers and placing them in the VR booths.

She was later caught breaking into the Brothel by Nia, and quickly left when told to.

Shinohara immediately left for the bank, hacking through the door and removing her own skimmers. She later had another meeting with Coach about job placement, and offered to take over Becky's job. Shinohara gave him the skimmers as evidence that something needed to be done. He agreed to take her on, and placed her as a teller for a trial. Becky was assigned to train her, noting that the datapads were glued to the desk for some reason. Shinohara interacted with a number of customers, including taking a deposit from Norman Flint. Coach eventually let both of them off for lunch, saying he'll pay for it.

They later ran into Loch who was frantically asking where the mayor went.

However, due to the events happening in the undercity, all of the restaurants were closed. The two went to the burrito stand, but were both quickly banned by 7.

After nearly breaking into the brothel for a meal, the corporate announcement played and Loch found the two again, out of breath and shouting that the corps are shooting to kill. Becky and Shino found Dagu who showed them the chaos happening in the Grove. Becky told Shino about how she could hear everything through a comms channel, and the two ran down into the Grove to look for Coach. They later got locked in, and escaped after failing to make a deal with the corp agents.

Returning to the Bank, Coach walked in and took the two and Norman up to the offices to hash a plan, but the corporate announcement ended as soon as they left - followed by the explosion.

After the destruction of the Grove, Shinohara acted as triage for the clinic due to short staffing.

Shinohara spent a good time swimming and exploring the island with Shea Lotre, and later Becky. She decided to take a permanent nap after getting run over twice by Johnny. She also spent a good amount of time petting the native creatures of the island.

At one point, she mentioned that she was the cause of the ship crashing in the first place, but quickly denied it when pressed for more information.

During the four hours of quarantine, Shinohara and her new coworker Alfons "spent some time together" while the others slept. She also kept an eye on Becky Cantuckit since some of the slummers might try to kill her with the rifle that Ryder brought. She later assisted the people stuck in clinic including helping Cap get his meds, and escaping via Dash.

After meeting up with Coach Eric, the banking crew minus the sleeping Becky ventured outside to get more intel about the row's current situation. Loch passed by several times saying that he has urgent information, but is too busy at the time to say it. Along the way, they met "Guardian One," a new street sam. Shinohara tried her best to give him a rundown on what he could do to help. She later tasked him with asking the grove denizens to stop drilling. Shino and Norman left to investigate the undercity hearing that there is a barrier blocking people from leaving. Unknowingly, the two get trapped in the undercity with the others, including Peperone Giovanni. After Giovanni gets stabbed by the poltergeist, Shino hid behind a building until the barrier was lifted, and she could return to the bank.

While the zombie outbreak scoured the Row, the banking crew hid inside the Dirty Diamond with some of the other slummers. Shinohara spent most of this time either copying data to send to media sites, or trying to break into datapads that the slummers were leaving behind. She later broke into Bethany Esda's shop once more to take parts and download the contents of her terminal after finding the various vlogs she recorded.

With assistance from Coach Eric, and the stolen vlogs from Beth's terminal, Shinohara pursued an internship with Atlantis. With the promise and delivery of information, as well as other unmentioned accomplishments, the decker was later promoted to a PR position in the Upper City.

While staying at Maia Seren's apartment, the two were raided by Astral HRT team headed by Ian Carthwright Du Pont. She has supposedly been killed during the raid.

She tends to be kind and compliment everyone she talks to.

Coach, Becky, and Shinohara on her first day. 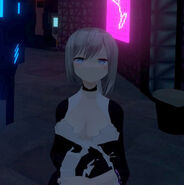 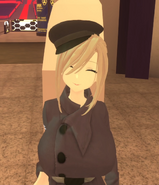 Shinohara as she joins Talaris
Community content is available under CC-BY-SA unless otherwise noted.
Advertisement