Hark Deadwood is a Wasteland Stadium Announcer. He is wirey, dusty, and physically fragile. He has a dream of starting a business that everyone in the Wasteland respects and loves. He wants to be accepted and prove to everyone that he can “do it”. He dreams to make the Wasteland a place that people would actually want to come to, rather than end up at. He is always chasing the “big win”, which also contributes to his gambling addiction.

On Season 2 Episode 2 he together with Proximo hosted an arena fight where Ryzy fought and won against the Nameless Knight. The battle was the inauguration for the reopening of the thunderdome arena. 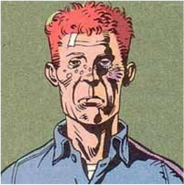 Hark and Proximo in Patches smithy

The imposing duo, Hark and Proximo

Hark getting a nose-job from Medbot and C3-Burn at the Scrap Town hospital
Add a photo to this gallery
Retrieved from "https://vrchat-legends.fandom.com/wiki/Hark_Deadwood?oldid=87164"
Community content is available under CC-BY-SA unless otherwise noted.