Hanz Elfans is a Loxodon, an elephant-kin war veteran with a deeply seated grudge towards the Avalon corporation.

Hanz Elfans served as a Combat Engineer for the Galactic Union during The War of Unification. In the war he participated in multiple engagements on the front lines, aiding in building up planet side defenses.

During a brutal assault on the Loxodon homeworld from Avalon forces, Hanz and his squadron attempted to hold a section of the defensive line using anything they had on hand in a desperate defense. Avalon forces, deciding that it wasn't worth wasting manpower on the position, deployed experimental chemical weapons on the squad's holding. The majority of his squad and surrounding friendly forces were devastated in moments, as the chemical agent not only killed, but stripped flesh from bone over long term exposure. This tragic event would be known as the "Elephant's Graveyard".

Hanz was lucky enough to survive only due to his squamates' pushing him into a sealed part of their bunker at the last moment. Surviving on what little supplies were left within the bunker Avalon forces swept the area and began securing it after the toxin had cleared resulting in his capture. Unable to put up any resistance after weeks barely on the verge of death Hanz was treated as the rest of his people, as lab rats building and testing of Avalon Pharmaceuticals. Only a few colonies of Loxodon survivors remain after their homeworld Lestradus was devastated. It's now a testbed for Avalon experiments & study, where the population are subjugated to produce products and act as test subjects.

Years into his capture, a soft hearted doctor, by the name of Hellen would eventually transfer Hanz off world to a new testing site, where he was able to escape his captors. They were not prepared for his species versatility with their trunks. After escaping he attempted to get in touch with his old Union contacts but came to the realization that the war was already lost. The corporations had won.

Fleeing the grasp of his former captors, Hanz left for the far flung system of Hellion, where he hides out in the wasteland surrounding Salvation City, far away from any prying corporate eyes.

Hanz out scrapping in the wasteland 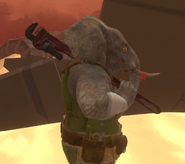 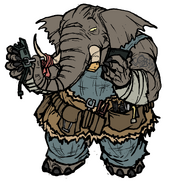