Scorpus, known as Hank Solomon before the splicing process, is a biogenetic enhanced human from Avalon with the initial purpose of warfare. He and thirteen other candidates went through a vast gene-enhancing experiment of implementing insect genus to the human body, allowing them to form their properties and hunting tools in the process.

Hank, codenamed 004-SCO, was enhanced with a common scorpion genus to develop strong venom through the growth of the iconic scorpion tail and telson where the venom glands can be produced.

After a two month 'larvae state', left in a human-sized test tube, the tail and stinger began to attach itself and grow on the lowest point of the human spine, however the combination of human flesh and scorpion chitin meant the growth leaves an incredibly weak spot between the merging of two different materials. Scorpus will sometimes mention his 'itchy arse', in regards to the chitin base rubbing against his skin.

The venom stored in the stinger was the problem, being described as 'nothing more than a common high or pain relief when injected' in his bio reports. The venom, highly luminous in the dark, courses through Scorpus' bloodstream, causing him to feel and act intoxicated if not regularly treated. Something he could deal with, but still something that was slowly killing him.

Failing as an experiment, Scorpius was dropped off in the wastelands to fend for himself, a failed experiment buried under sand and sun.

His tail serves as a third arm, used mostly for balance and defense. He may also survive without food for around two days, so long as he hydrates each day.

Without it, much like a drunkard, he will begin to lose focus, coughing and losing breath, and straining to keep a train of thought or even keep himself upright.

Anything after twenty-four hours will collapse his nervous system, organs will fail, ultimately killing him. Something more permanent would need to be done to fully stop the venom spread killing him. 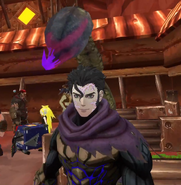 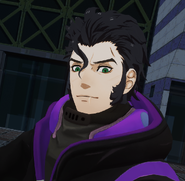