Male
An idealistic and bright individual, dresses messily but heavy, with little to no concern for his appearance.

Hadwyn Ermire is a human GEB representative working out of the Wasteland of Hellion, where he grew up. Bearing cybernetically augmented eyes capable of analyzing the development and health of plant-based organisms, Hadwyn spends his days trying to research a way to re-cultivate the infertile wastes, with the ultimate goal of developing a new food source for the Wasteland and possibly even the lower reaches of Salvation City. He calls this endeavour his "Eden Project".

As his work does not pay without results, Hadwyn spends some of his time working as a cook in the wastes to make ends meet. He is fiercely loyal to those he calls friend, but such individuals are few and far in between, as Hadwyn is a difficult man to work with, being somewhat inexorable.

Having returned to Scrap Town and the wastes of Hellion after several years elsewhere, Hadwyn returned with knowledge of botany far surpassing that of his fellow wastelanders, intent on using it for their benefit. Saddling up with a job working for Jyggal at her restaurant to earn extra credits, Hadwyn quickly acclimated himself to the new environment. He soon became acquainted with a few locals, including the mercenary Luin Malice and the bartender Pepper Alex Ly. After talking to Luin briefly, Hadwyn decided the merc could be useful for fending off dangerous wasteland creatures while he himself went out to the nearby Oasis for research.

The day after arriving, after finishing up working the morning rush at the restaurant, Hadwyn went to find Luin for a short expedition to the Oasis. Picking up Romulus at the bar as extra help, and hiring Batharra Ront as a driver, Hadwyn led the party out to the Oasis. Misfortune would rear its head, however, as shortly after arrival, Hadwyn suddenly passed out, and before the party could retrieve him, they were assailed by a massive wasteland Sandworm. The three hires hopped into their vehicle and pulled the worm's attention, leading it away from Hadwyn's fallen form. When he came to, he contacted them over radio and they managed to maneuver their way back to his location. With precious little data under his belt, the four drove off back into the wasteland, returning to the relative safety of Scrap Town.

Later that same day, Hadwyn's luck took a turn for the better as a peculiar creature named Bo suddenly showed up in Scrap Town. A literal walking, sentient mycelium called a Myconid, Bo was - to Hadwyn - a scientific anomaly, as well as an opportunity to learn things about his own trade that he would never have thought possible. Through an expression of respect and good faith, Hadwyn was able to earn enough trust from Bo to gain permission to scan her body. The data he uncovered on her anatomy revealed things about plant biology - and the fundamental aspects of nature - far beyond anything he had ever previously considered. When Bo and her fellows from the undercity (including Leilani and Kythus) ventured out into the wastes for their own purposes, Hadwyn made sure to provide them with some of the water he'd intended for his own plants, as well as ensuring (to the best of his abilities) that they were safely reunited upon their return. He was given permission to come visit the undercity in the near future, and was even told about the mystical Grove hidden among the depths of Salvation City's underbelly. 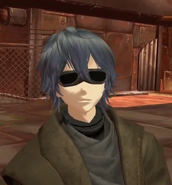 Hadwyn is invited to the council of Scrap Town 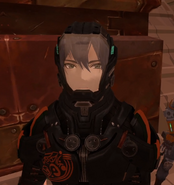