Gloop is a mysterious and intelligent sentient slime that took a humanoid shape after studying those around him. He gained consciousness at what looked like a corporate waste dump site, having been granted life for reasons he's hoping to uncover. The only real clue he's got is his core, which is branded with the Woto symbol.

Slipping through pipes and cracks, he finds himself in Callous Row, hoping to make his way by selling his own excretions and services while gathering up any information he can about himself, keeping a weary eye on anyone from up above.

Maybe he'll even figure out if he's got a name, as now he refers to himself after what the first person that walked by asked: "What's that weird gloop?"

While Gloop is working at The Dirty Diamond Brothel, two WOTO members by the name of Rikky Raclette and John Goldman approach him and exclaim that he looks quite similar to a jelly WOTO cube. Gloop gives them a small sample of his goo, which was actually just a green drink from the brothel.

Goldman and Rikky discovers that Gloop tricked them, which only increases their interest in his mysterious goo and they begin to pursue the slime-man around The Row and Scraptown, while Gloop spends much of the day eluding these two nefarious corp members. He does however end up meeting with Goldman at the WOTO offices with Rikket Rotfinger as his +1, and even lets Goldman take a sample of him.

With his close friend and boss Kee’ra Diamond by his side, Gloop travels to the Upper City to meet Rikky Raclette in the WOTO offices. There, it is revealed that Gloop is actually a sentient mass of discarded Jelly WOTO-cubes; a discontinued variety of the cube that was dumped by the corp a few months back. What seems to give gloop his shape and sentience is a mysterious sphere which Rikky described as a "WOTO-Core", that Gloop hides inside himself.
Rikky and Gloop come to an agreement that they will use Gloops replicative abilities to help distribute more food to the Savior City citizens. 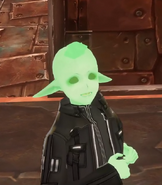 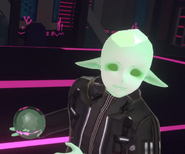 Holding the WOTO-core keeping him corporeal and alive