https://discord.gg/RUGUd7H
The "Gator RP Group" or "Gator Crew" is the continuation of The Great Pug RP Collective founded in January 2018. The group at first had no official name or title aside revolving around Roflgator but would later be referred to as the "Gator Crew".

They are a group of VRChat friends and roleplayers that come together in near-daily light-RP and improv of a non-serious manner with lobbies hosted by the founder and manager 'Rob' Roflgator. The focus for Rob revolves around his Livestream on Twitch where his perspective resembles that of an improvised live broadcast reality TV-show.

What Roflgator and many other group members find distinct and are proud of is the fact that the lobbies are almost entirely improv and much of whatever is going on depends on whatever creativity and flare individual members bring to the table on any night, giving a chance for individuals to let their personalities shine and even find their own niche and role within the RP. Too much planning or scripting is heavily frowned upon.

As such, unless predetermined by Roflgator himself on that particular day or as a part of an ongoing theme, the focus of any night can range from comedic, dramatic, action packed, lore-focused, game-shows to survival horror or completely random.

(Don't subtweet me if you get kicked for not following)

(Devs have been working with us)

These were in effect during Bricktown RP prior to July 2019.

Exceptions MAY be made if:

Don't be thin skinned and don't take all sudden kicks personally, as it will mostly be done to reduce lag. Reminder that when joining a Roflgator lobby, it is an RP lobby, and everyone is expected to RP in one way or another. Joining on a friend and just "hanging out" while not contributing anything will make you more likely to get kicked. If you have no intention to at least try to RP or be entertaining when joining, move on. Basically, play along, participate, and you should be fine.

Later a rule was agreed to avoid killing off other peoples main characters unless they agreed to it was implemented. Instead you would get mortally wounded and hospitalized.

The original group sometimes referred to as "The Great Pug RP Collective" was established in January 2018. The group would start off at a fair size and initially include many Team Five members including Oturan, Drekwiz, Dyrus, and others. Outside of T5, early members would also include Chipz, Nuts, LeyLey, BriteOne, R3dzDead, Shrimp, Hydrand, Ayytroxlmaokai and Emerysaur.

The early days are partly documented in the Roflgator Episode Guide as well as players individual character articles.

The locations where the roleplay takes place varies from session to session but usually Roflgator's most recent self-made maps. Prior to April 2018, when he began building his own maps, the location was usually The Great Pug.

The average night, where much of the lobby's developments are driven by whatever plot or story Roflgator or other significant lobby participants have going on. This can range from the typical activity of RP wingmanning, hook ups, breakups, and dating to entire dramatic RP arcs including but not limited to mafia wars, political intrigue, police raids, demonic possessions, ghost hauntings, alien invasions and even full-blown war arcs with varying factions, weapons, character deaths, giant robot fights, ambushes, espionage, sabotage, and other related spectacles.

Further information: The opening of the 8est store

Roflgator's favorite and specialty RP, dating RP is the most common form of RP taking place in the group when there's no central story arc going on at the time. It is regarded as the "foundation" of Roflgator's RP style as it was the common activity he started with back in January 2018. Dating RP is when Roflgator probes individuals for their love interests and then promptly sets them up on dates, then hilarity ensues as the date is either constantly interrupted by shenanigans going on in the lobby, the awkward, seemingly forced hook-up leads to surprisingly entertaining dialogue and chemistry, or the date is meant as a way to get back at someone, usually the partner of someone that's on the date. Though dating RP is what Roflgator partially originated with, from October 2018 to present day, dating RP was the mainstay of the lobby.

What Roflgator simply refers to as 'Random RP', a nameplates off lobby refers to the occasional game played by lobby goers where every person turns off nameplates (the ability to see a player's name) and leave to an avatar world to adopt a random avatar and accompanying random personality. Everyone converges on a new lobby and hilarity and shenanigans ensue as everyone interacts with each other in new, wacky personas as no one knows which one of their friends is playing who. The cherry on top is the very end when the lobby leader (usually Roflgator) ends and orders everyone to turn nameplates back on, where everyone reveals who is who, with many being surprised at the skills for their friends of playing completely different personas. The game also allows RP "underdogs" per-say to shine as well as they can express whatever random personality/character they wish.

Beginning in late July 2018, Roflgator would come up with the idea of 'Horror RP' after exploring a particularly large and spooky VRChat map. He would later use the map to conduct a type of Dead By Daylight-style RP where one player is designated the monster, and everyone else fans out across the map - in groups or by themselves - in order to hide and run from the monster. Once the monster catches someone, that person respawns and becomes a monster themselves, and this cycle continues until every person on the map has become a monster after being hunted down by an army of monsters or if time runs out. The winner is whoever was never caught. Likewise, there's a chance no one wins.

In August-September 2018, as a way of helping prevent burnout, Roflgator adopted a weekly "RP Card Down" night in the lobby in which everyone drops their RP personas and hang out and do non-serious miscellaneous activities instead, ranging from Who's Line Is It Anyway?-style dating shows and talent shows to just friends sharing hilarious IRL stories, debating topics, or conversing about how to improve the RP story. RP Card Down night was eventually discontinued due to that also receiving burnout.

Quirks is a mini-game Roflgator implemented on RP Card Down Nights in the middle of September where participants were split-off into teams and had to act-out an improv scene where a chosen bartender must deal with and figure out the 'quirk' that each guest has before a timer runs out.

New tryouts mean inviting new players from friends of members or viewers from Roflgators Twitch stream who join from chat. They're usually asked a couple of questions and given a scenario and role to "improv", usually made up randomly on the spot by Roflgator. Other roleplayers in the lobby assist with portraying the scenario. In order to be get accepted try to impress by doing your best to immerse yourself in the situation and create a funny situation.

In 2020 after a rise in popularity the group stopped doing RP tryouts.

On January 7th, 2019 the group began an RP parodying Old Western-style activities from gun duels, saloons, to horse wranglin'. It brought a new setting for the group to let its signature improv RP style to shine, especially in the hot deserts of the "wild west".

Another themed RP-session was the opening of a space themed bar, where everyone brought characters in typical space opera fiction style.

In light of and partly as a parody response to another popular RP group hosted by Chipz, named Ascension Academy RP that does a magical school Hogwarts style RP they decided to try their own version of this. It ended up with a much more anime vibe to it.

During stage improv, scenes are narrated by a caller who directs the participants on stage what to do. The act is very similar to improvisational theater.

Roflgator growing up as a fan of various reality TV game-shows often hosts his own re-imagination and improvised variants of these.

Being a member is a relatively loose term and means that the player is active regularly in the lobby, usually a couple of days weekly.

Please note that not every member plays during every lobby, as lobby participation isn't consistent and tends to fluctuate as RPers are free to join the lobbies at their leisure. For example, some nights can have nearly every member participating, while other nights may only have half or even less of the group roleplaying together.

This list is constantly changing, please don't get salty for not being listed. It's difficult to keep track of all who comes and goes.

Players who are no longer active or very seldom come and visit the lobby except on rare occasions.

Aside from some highlights, streams that are older than 2 months are unavailable on Roflgators Twitch channel but can be found archived on YouTube. See playlists in: 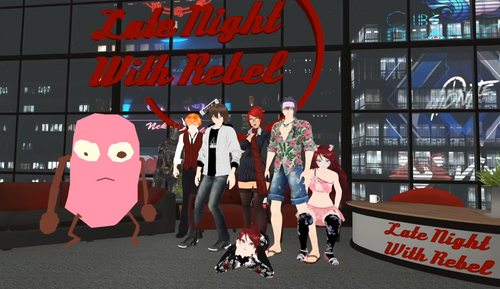