Gambit is a VRChat Youtuber but his first debut was in KSic's video playing the role of his father. He roleplays only for fun and enjoys most of his time with newer people.

Gambit's former avatar was one of the Nappas (of which he can switch back into any time). His current avatar and character resembles some type of robot with a light cyberpunk theme on him.

Attempt at Joining the Loli Squad

Nappa had an interest in joining the Loli Squad. Seeing as he went to go and asked for the approval of the other members which ended up rejecting him for having too much muscle (and apparently too THICC). After being denied, he found a Loli Squad armband through Kiera's knowledge but it turns out to be a hologram and not the real thing leaving a disappointed Nappa.

Gambit, Lilbagel and their crew had found a world where it randomizes quests that allow them to immerse themselves as if they were adventurers. These quests don't have a time limit so they set one themselves. With each quest completed, more people get roped in or get involved probably through interest of trying it out.

Dagu is a short Dragonkin alien who is very poor but finds himself in Callous Row, stuck to pay off his debts after making bad decisions and previously being sold as an exotic pet.

Aarick is the bastard son of a noble.

Lauretta is a lady of House Hartford. She is young and determined to learn about the knights of her disgraced house.

Chatting with Roflgator at the Neko Nights Night Club 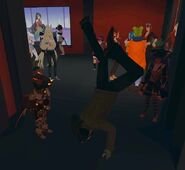 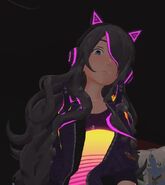 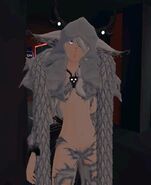