Frankie was once a wastelander, always a wastelander. Born to a relatively normal family. A homemaker of a mother and a hard working blue collar father, Frankie learned quick that it didn’t matter how pure hearted you were, or how hard you worked; you were fucked. Frankie quickly abandoned any pursuit of higher knowledge or status, finding it came to easily to him to be an interesting venture, instead developing merely an instinct for survival. Frankie found that he was pretty damn good at slinging drugs on a street corner. Not good enough to go anywhere, not good enough to make a lucrative living, but good enough to eat. Frankie’s spent a considerable amount of time in gambling dens - monitoring who’s on the up and who’s on their way down, picking successful, moneyed up marks, to buy his bullshit; and downtrodden losers looking for a dangerous loan. 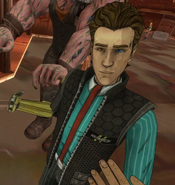 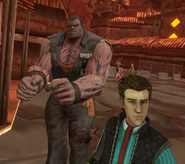 Frankie tries to get Xia and Desmond to bet in the arena match
Add a photo to this gallery
Retrieved from "https://vrchat-legends.fandom.com/wiki/Frankie_Scaletta?oldid=88155"
Community content is available under CC-BY-SA unless otherwise noted.