Flint has a checkered past and a record dipped in blood. That’s what happens when a colony punk believes they can escape the urban hell that spawned him. He pulled jobs for the wrong kind of crowd, the type of people who pulled out your nails for not saying ‘bless you’ when they sneezed. Life on the streets is brutal, and he learned that fast.

On a real odd day, Flint broke into a rundown church chapel just before coming across the dead body of his local pastor. They looked beaten to death worse than some horse that people called Sheesh. Words etched in wood were scrawled on the walls and pews, he etched those words to his mind the same way: 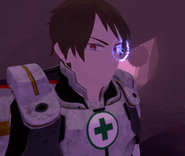 Detecing magic during the expedition to the volcano