Fishbowl is a water slime living in the Undercity. She works with the Galactic Union to keep the streets clean.[1]

A beautiful stone fell into the hands of an elderly fisher drow who happened to be collecting seashells for his wife. After hours of being left in a bucket, the stone secreted enough water to fill the bucket… and eventually the drow had a new surprise for his wife.

On further inspection, the stone was found to be embellished with magic. It is yet to be determined if the magic was naturally fossilised overtime or artificially imbued.

The drow couple raised the slime as an extra bucket for their fishing trips instead of turning it into the corps.

She is currently employed by The Galactic Union, aiding to keep The Undercity rivers clean. 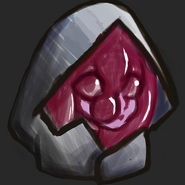 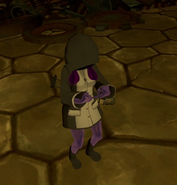 Working for The Galactic Union