Fik Tich is an elderly half-moth demihuman that recently moved down to the undercity in Callous Row.

A weaver by trade, Fik has lived almost half of his life in the shadows of the lower parts of Saviour City - unless there was a neon sign nearby, in which case he was directly underneath it, flailing wildly. 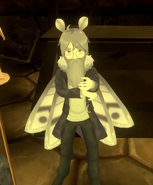