Fenris Agnar is a Lupine who runs the food stand, Savage Bites, in The Undercity's Fire District alongside his adoptive daughter, Anuki Agnar.

See Fenris backstory illustrated in the gallery below.

Fenris was part of a small independent group that wanted to start a colony away from the eyes of the corporate overlords. However, no place is safe from corporate eyes and traitors are abundant. They were betrayed, captured, and enslaved as labor at a corporate slave camp. Surviving using his surroundings, Fenris did the best he could until he developed Black Lung and knew he wouldn’t survive if he stayed. During a slave transfer, the transport ship crashed and an escape attempt was made. Fenris took this opportunity and disappeared into the slums of Hellion's Salvation City.

Now Fenris is looking to create a new home and pack to call his own. 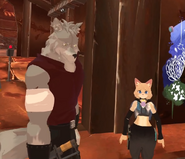 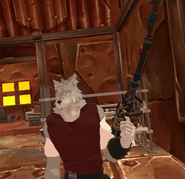 Purchasing a harpoon gun from Sten at the Scrap Town smithy 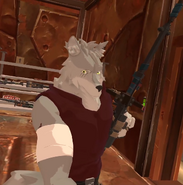