Green
Felix Dolore is an incinerator worker and garbage collector by day and drug dealer, maker and gang member by night. He makes his living in a shack in the Undercity of Callous Row, the slums of Savior City on the planet Corvanis 3.

Growing up as a "street kid" he acquired the skills necessary to survive such as a silver tongue, thievery and hiding one’s true feelings. While impatient and overambitious his life in the Undercity has taught him much, how to use shadows to his advantage and some forms of illusion magic from the fellow inhabitants.

Desiring fame and fortune he also wants to overthrow the mega-corporations responsible for the death of his family and someday restoring the Union. By proxy he is a member in the rebel organization known as "The Shattered Legion".

Felix’s life was once simple and well off because his parents were in esteemed positions in the Union, but that all changed when the The War of Unification broke out. During the ending of the war his parents were taken and executed by the corporations as an example by the corporation’s robots. This led to a HUGE irrational bigotry to robots and even caused ripples of smaller hate towards those that willing become cyborgs. “Technology is a tool not human or the next evolution.”

Orphaned at the age of ten Felix had to grow up rapidly to survive on his own. This led to a myriad of problems like brittle but rapid maturity, not fully being aware of some social norms, masking emotion on numerous topics, over curiosity, and the desire for approval/parental-figure. This wasn’t all bad as his rapid maturity provided strengths such as, street-smarts, quick wit, skills in thieving, a silver tongue, and deception to his emotion.

Now alone, he ended up bouncing around living anywhere he could rest his head for the night. He used to sleep in alleyways, the Homeless Wonderland, or even the bar when he wouldn’t be thrown out , but eventually he landed in the Undercity. He managed to find work at the Incinerator disposing of trash and, with a small fee, anything non-trash that someone wanted to disappear. During his spare time he would earn the favor of alchemists to learn how the staples of drugs were created. Which he then used to start his own business selling the various “medicines” to the many drug addicted locals of Callous Row, but making sure to test some of it for… “quality assurance”.

While living in the Undercity he got introduced to magic by some of the kind but creepy locals. This sparked an unquenchable fascination for the arcane arts and the possibilities they could bend. The more he learned about magic the more he wanted deeper knowledge on the various topics and this developed a trust and reliance for magic. This grew and twisted to the point where he was convinced that magic was the key to “righteous” power over all.

Felix notes, returning after the quarantine

Finally made it back to Callous Row after the quarantine and so much has changed. My first goal was to establish connections with the new locals in hopes of finding information streams. Unfortunately my new job, running the Incinerator, seems to be inaccessible until I dig it out. On top of that it looks like I've found a new source of drugs and maybe new acquaintances with similar values. Things are looking decent.

Recruited into The Shattered Legion

Felix gets an upgrade to his paycheck when he is recruited by Rook, a half-orc freedom fighter running a resistance against the corporations named "The Shattered Legion". Together with a small team he assists in the robbery of a Mars patrol that is carrying an important package of supposed "mage-killing" ammunition.

Working for the same employer he had competition when it came to selling drugs in Carl “8” Clerk. After Carl had gotten Rook to sample some drugs and went on a public tirade in the streets he confronted him about it but let it slide.

The robbery was a success as they didn't suffer any causalities on their side but it definitely got the attention of the corporations who mustered an incursion into Callous Row. Sending an assassination droid into the slums he was caught unaware in the Undercity and got shot, feel into a crevasse. Thought dead he was miraculously saved by the other inhabitants of the Undercity.

He stopped Zig Malice when the fake doctor attempted to steal medicine from Dr. Cells clinic and returned it.

Rescue mission to save Bo

Encountering some hiccups and being captured, they all managed to escape intact with the exception of "Alexander" who was made an example by a bounty hunter. Miraculously he also survived.

Making a bet with Faye to marry her if her father Rook could beat him in Argens battle arena he found out and came at him furious. When Rook found him he threatened that unless he ceases this farce bet - the only thing he would ever be sexually intimate with would be the ground.

Assassinated by Kaiphus the collector

A man in armor approached him, telling him how much he admired his figure and asks for his help to get a terminal working. As Bethany approaches and Felix turns his back, the armored man grabs his hidden gun, yells out, and just as Felix turns around shoots him multiple times in the chest. The shocked Bethany witnesses everything and flees the scene.

R.G.-2 leaning over his dying body his final words to him was to make sure that he remembers their conversation about life - "to live is to endure". As Felix blood escapes him he is brought to the clinic but unfortunately his life could not be saved.

For the audience the armored man turns out to be "Kaiphus the collector", a corporate assassin sent by Nirvana for his involvement infiltrating their compound. 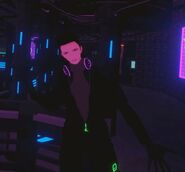 Felix meets and talks to Rook

Recruited to work for Rook along with Ais, Rin and Kythus

"Phil" and Felix with Rook after robbing a Mars partrol delivery.

Shot by a Mars-corporate droid.

Checking in at the Nirvana Corporation

"Alexander" and Felix
Community content is available under CC-BY-SA unless otherwise noted.
Advertisement