Not to be confused with: Fred (Disambig)

Prototype unit FRED. Created by a small company under GEB as an experimental unit to produce sustainable food by recycling edible material. They were designing the unit to create a new brand of energy bars for commercial sale. However, the company did not want to test the product on their own people as the energy bars could have hazardous side effects to the people who ate them. They instead decided to conduct an experiment.

The company discovered that GEB was cutting off the food supply to The Row. They knew that this would lead to widespread famine and that they could obtain data to work with if they sent their FRED unit to the Row, as the inhabitants would have little choice but to buy their experimental product. With this in mind, the company sent over FRED to promote their new Plood Bars.

Link to lore on the Team that made FRED

Major Events that happened to FRED

- Started in the grindstone

- during the first wave in the grindstone, got shot in the leg, then in the chest.

- repaired by theris to full health

- shot in the left arm, Theris tried to fix it but aliens came

- laid on floor in the back of the grindstone, whimpering in pain

- got stabalized by marceline and Theris

- stayed in the hanger area.

- got Valkyrie pistol from Elwin, traded it for a smg from Smiles

- At some point lost scrap shotgun

- saw Cain die right in front of him. Internally cried.

- heard all the explosives go off

- second alien wave, got shot 4 times in head and chest area. survived with a roll of 5

- got fixed by Marceline and Blayne.

- internally i am alive, externally, Body is fucked.

- just happy that we lived

- got repaired by Marceline to be able to walk. Still looks like a cheese grater

- rikky and manyu in the row? Guess they are on a pub crawl.

- learned from Dash that Jonny died.

- laid down in the tea shop depressed that  Jonny died

- looked for Dagu and/or Ryder desperately.

- found them and learned that Jonny was indeed dead

- told alo and Bertram that the funeral for Jonny was happening soon.

- cried as I told them what happened. Bertram told FRED to not let corps know.

- saw BUB with toolbox. Helped BUB move around as he couldn’t float

- got a paint job from Marceline and Maia. FRED’s back in black… and yellow.

- made zax a meal. Cooking 4 bitches!

- delivered him the food.

- oh hey boss is in the wasteland on his bender

- helped served drinks at the bar.

- got supplies from my store to prepare for wasteland adventures aka my vacation from the store. 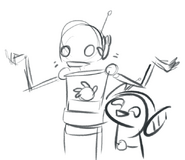