"Yes, I killed somebody before." ― Esmae

"I need my stabby-stabber." ― Esmae, referring to her knife

"We will be together, I will make sure of it, even if I have to get rid of any problems that come in the way." ― Esmae, talking about her love interest.

In the past Esmae was a student at the Ascension Academy. Present day Esmae assisted in Chipz escape from the Vampire Council.

Most of the time she has a very innocent seeming demeanor but behind it she hides darker thoughts and occasionally gives passive-aggressive threats of violence.

She has a love interest in Chipz which she previously kept secret but her way of talking about it borders on obsession and possessiveness in characteristic "yandere" fashion.

Her condition of being a spirit and coming in contact with darker spirits sometimes causes her to loose herself, with symptoms like memory loss.

In the present she helped Victor and Hybris to rescue Chipz from the Vampire Council, by getting into his mind using some kind of "thought projection" while he was trapped in captivity, to wake him up from his dream and to know his location.

History of Past Esmae

Esmae and her parents died in a fire when she was very young leading to her returning as a spirit.

The first fellow student that she opened up to when starting at the Ascension Academy was Chipz, they quickly bonded and she told him about her magical abilities of thought projection and some of her worries related to the academy.

Spying on the teachers

Together with Chipz, Hoshi and Rook she managed to get into trouble after spying on Professor Vondanen and Professor Willow who seemingly attempted to open some kind of magical door in a crystal cavern close to the academy. They were confronted by Professor Conor who claimed that he knew where they had been, but said that he wouldn't tell on them. She was later approached by Von, who treated her atypically kindly and asked her to keep an eye on Chipz for him. Instead of doing so she told Chipz of what Von had said. [1]

Again during squad assignment she once again spied on Vondannen together with Chipz and Rook, this time they saw him talking in a foreign language to the crystal beacon used to assign student squads. They were caught in the act of spying on him and when Chipz threatened to tell the other teachers about it Von seemed bothered, mockingly he insisting that that they really should bother Headmaster Kareeda with this information right away - and proceeded to drag them along on the charade to do so. Questioning them again the matter was eventually dropped. When the students left Von alone again she stayed behind to talk to Von, told him that it was all her idea to spy on him, attempting to clear her fellow compatriots. [2]

Ryder once confessed his love for Esmae who returned mixed signals.

Esmae and Picwik both being spirits shared their problems recently with them feeling connected to all the other spirits at the Academy, including the evil ones. This resulting in them being afflicted with occasional memory loss and amnesia.[3]

She was later so ill affected that she forgot who even Chipz and Rook were.

A bad game of forgotten identity

To make light of the situation of her memory loss and avoid the teachers attention they pretended that the various students identities were swapped around when she mixed up who was who.

Mistakenly thinking herself to be "Chipz", the real Chipz played along with it and told his classmates to do so as well.

It didn't turn out the best way when Vondanen found out about "the game" and threatened her disobedience with demerits and as she refused to comply she was eventually given a demerit. Being saddened about getting a demerit she was comforted by Rin who told her about her true identity.

Learning it was an excuse to avoid suspicion she got upset with Chipz after figuring out the truth.[4]

She kept her love interest and obsession towards Chipz secret but revealed it to some of her fellow trusted students who found it fairly obvious. Breaking her secret she confided in Victor and Speca.

Victor tried to trick her that in order to win Chipz affections she needed to her stab him in the heart with a stake or sharp object. Even if his speech towards her was a possible attempt at dark humor she didn't seem to understand it as such.

To Speca she admitted her obsession, that she would get rid of anyone who would stand in her way as well as not accepting any possible rejection. If he didn't want her she would make sure that nobody else could have him except her either. Speca told Esmae that she was going insane and was threatened as well.

Esmae told Speca her that she would get her "stabby-stabber" and confess to Chipz openly. Speca would later relay the information to Chipz but he didn't appear to take it seriously.[5]

Along with her Squad mates seeing her collecting hair samples she apparently set up a shrine of sorts in Speca's room when she slept on the couch in the main hall. The "shrine" had candles, an image of herself, Chipz with a heart over his face with the text saying "Mine" below. Speca was also pictured but with her face crossed over.

When asked about the shrine she denied having any knowledge of who built it, instead she told about her family portrait having gone missing that she had placed on an original shrine of hers. Instead she pointed suspicion towards Speca having been drunk or Barthall for no given reason. Out of nowhere when Chipz stifled a laugh she weirdly asked him if he wanted her to choke him.[6]

After seeing Vevina and Chipz getting closer and closer Esmae decides to take some actions.

After the death of Rin in the Aldoria mission, some grieving students lead mostly by Lila convinced Esmae and Melanie to show them a way to "see" Rin, curious Esmae follows them top the lighthouse where Lila and Flora chant and incantation to let her "see" Rin needless to say Rin was already dead but what they saw was the projection of Ymra in the form of Rin, this "Rin" will mostly take advantage of Rin and Esmae past friendship to manipulate her into his own plans. After spreading his slumps over the academy "Rin" entrusts Esmae alongside Melanie to get Arbor shards. Esmae and Mel device a plan where they will incapacitate Arbor on the docks and they will shatter her shards to take them.

After facing many problems because of the Ymra visions to the extent that she was locked in the dungeons, the Academy decides to fight the Church of Ymra. Traveling alongside the Academy Esmae arrives to Camp Cari and the control of Ymra seems... TBa

After getting rid of Ymra control and the injuries sustained against his classmates Esmae fall unconscious and the students doens't seem to figure out a way to wake her up, the headmaster alongside with the students mostly from Ignis suggest that they should use fey water to help her as it worked before when she sustained spiritual injuries after getting into Speca mind. Getting inside of the fey water inside of the Dryad grove helped Esmae to recuperate but when she stabilize a pink glow seemed to emerge from her imitating what it seemed some ears and a tail but not only that her eyes changed color to golden and she grew shar fangs and nails, on top of that she experienced a major upgrade in force and speed as she seems to be able to keep up with his vampire classmates and to be able to tear apart a crocodile and a drowned by herself.

Meeting Chipz for the first time at a bus stop at the Ascension Academy. 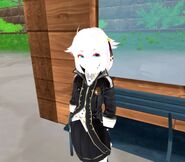 Esmae and past Arbor at the academy.

Talking to Chipz about her powers. 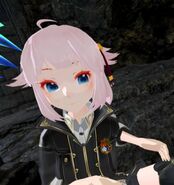 In the crystal cave with Rook and Chipz

Following Professor Vondanen to a graveyard with Chipz 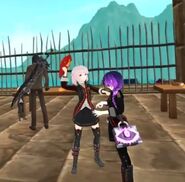 The Spirit. Art done by Zandwheet.

Esmae getting teased by Chipz

Assisting in the burial of Reginald The Floating Skull. 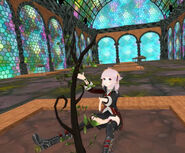 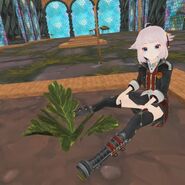 Singing "Despacito" to her plant.

Singing "Creep" to her plant.

Studying in the Academy Library

Studying in the Academy Library 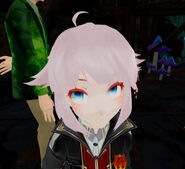 Esmae in the Academy cave 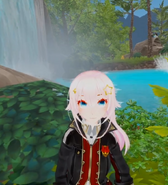 Esmae presenting herself to Professor Albrecht

Esmae taking a snack after the first test of placements

Esmae outside of Vanguard 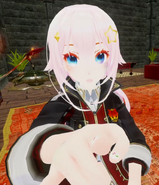 Esmae with a bread

Esmae in her casual uniform

Visiting Chipz in a dream.

Breaking out Chipz from captivity together with Oblivious and other members from Aegis.