"This is not a thing of Elves." ― Erthoriel

Erthoriel is athletic and lithe, and speaks with an airy, distracted voice, which gained her the Elvish name ‘Ei (HEK) thor(TAWrē).’ Despite her unapproachable nature, disinterest in the living, and reluctance, she is dependable when forging agreements. She will never betray those she made an agreement with, though she is clear and upfront she will escape over fighting battles. Though she is a member of House Inalamin, she speaks little of them or her fellow elves of Eshma Thalas

The unremarkable elf ‘forgotten’ by her Kin. Erthoriel was born apart. With little personal skill or connection to others, she was the most quiet of her kind and made few friends. The only spark of life that lit her eyes was when she would discover a new object, relic, or artifact. To be handed a book and left alone was her ‘playtime.’ Not even her parents knew what to do with the quiet Lady, who was ever polite, but untouchable. Her decades at home were spent in quiet study of the one hobby that drew her interest. When her House moved North, her entire life was disrupted and she became even more insular. Intelligent as she was, her knowledge was unusable to others, for she hoarded it and only rarely displayed her learning when presented with a new object to study. Rarely would she open up and come to life, offering vivid details on what she knew or could learn from the presented offering.

After her House was attacked in the Second Era, Erthoriel’s reticence took over. The girl returned to Eshma Thalas was even more broken and silent than before.

By the Third Era, Erthoriel distanced herself from living beings and peoples. When the Drow were unleashed, she felt no further need to be with her kindred and departed to study the great history of the world. Eschewing humanity’s lands, she traveled Gradia, the West, Vurnfaldhur, and even spent an unfortunately cold few decades in the frozen Haeloth. Though the many years of her travels, Erthoriel’s light-footed nature and natural isolation led to stories of the ‘Witch of the Forest’ appearing every few decades if she settled to study for too long. Of course, the long ragged cloak helps with this impression, and over her life she has taken advantage of the natural fear. Since departing Eshma Thalas, she has never had a home and prefers to string up her temporary abode for ease of movement. Everything she needs she harvests from animals and land or does without. 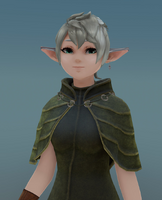