Brown
Eros Totle is a character in the Callous Row RP played by jaypsychotic.

He is from a well off family and was born and raised in Savior City where he made quite a name for himself as being a himbo. Eros attended a Talaris based boarding school where future employees are breed, it was there that he learned and excelled in alchemical magic.

Eros was born into an uppity family among Savior City's middle class population. His parents were obsessed with gaining more; more power, more wealth, more renown. Eros had plenty of siblings that his parents tried to mold and model into the perfect matches to marry into other more well off families; but Eros never quite fit into his parents visions. This caused his parents to neglect their son and eventually just ignore his existence all together. He spent the early part of his life being raised by nannies until his mid teens when he was sent to a Talaris boarding school.

With no family to rely on and no nannies to do things for him, Eros had to learn how to get things done himself and how to get the things he wanted in life. This lead him down some dark paths. The only redeeming quality anyone ever told him he had was his good looks, so he learned to use those to his advantage. Eros started selling himself to obtain things he wanted or even for things like food when no one thought to top up his credit card. He unabashedly slept with anyone, male, female, married, etc. This, of course, caused more than one issue in his life. He got the reputation of a homewrecker. After doing this for a few years while at school, it all came back to bite him in his pert ass.

One day a mob of people he slept with and used jumped him outside of a mall in the city. They beat Eros into unconsciousness and tossed him into a large industrial dumpster behind the place. By the time he came to the container was already well on its way to the dumps in the wastes outside of Callous Row. After being dumped unceremoniously onto a pile of trash Eros dragged his broken and bruised self into the “safe” space of Callous Row. He spent some time living on the streets and selling himself to anyone willing to give him a few credits and a roof for a short time. Eventually he found his way to the local brothel, The Dirty Diamond, where Kee’ra took pity on a pretty face and gave him a job working for her.

Eros on a guided tour led by Guidebot 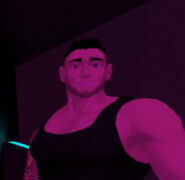 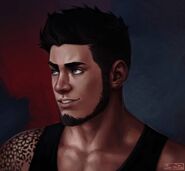