Enzo was brought into the private arms dealing business through his family. He had a vested interest in aiding in the influence of wars to further his beliefs and shutting down the beliefs of others.

Through this private business, Mars took an interest in Enzo and brought him in at a low tier, working under a regional manager. That region expanded when Mars decided to promote him to a Lieutenant and continue the arms business in the struggling market of Callous Row.

While talking with Rikky Raclette, they both get a message from Thaddeus requesting a meeting. They oblige and the soverign quickly arrives at the Uppercity.

At his private meeting with Enzo, Thaddeus praises him for his noble deeds in regards to the incoming galactic threat he discovered in episode 7. Thaddeus also informs Enzo of a traitor within MARS, and although Thaddeus does not know the name of the traitor, he says they are "Idealistic, kind hearted, believes in the people" and later clarifies that they are "flesh and blood"[1] . He also advises him to be careful around The Row as the traitor is working with someone there.

Enzo left Corvanis 3 after Episode 9, and his duties were delegated to Razz Arleth. 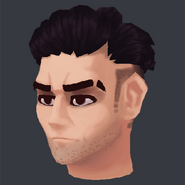