Living in the Upper City for a majority of her life and having her father being a respected researcher made her grow up in a wealthy environment. Her mother however was simply an affair from the row to her father. Her father decided to take Emily in after learning about her affinity to magic, disposing of her mother in the process. The family Emily grew up with was driven to be hungry for wealth, status and a good reputation; things that never ended up sinking through to Emily.

In hopes to find acceptance within her family Emily desired to prove herself to be as skilled as her stepbrother, in hopes to live up to his expectations and gain his respect. This was for the longest time until she surpassed his skill levels, became more advanced in combat and planned on working for Masaru to start taking her own path. She saw that she could not feel fulfilled trying to fit the family's ideals and decided that she wanted to take a new start.

Upon announcing to her family that she was leaving to start working for Masaru her family took action and placed a curse on her that took the shape of the flower tattoos on her arms. The curse started as two smaller flowers on each wrist but eventually started to spread further over her arms. To spite her family Emily decided for herself that she would find a way to rid herself of the curse through her own abilities.

When Emily found out about the recent events within the undercity and the coven she aimed to take this chance to learn more about magic whilst acting as an agent for Masaru. 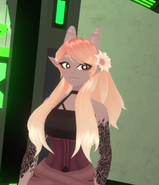