Male
The ultimate fusion of flesh and steel, Encore is a former Valkyrie' Super soldier, from the same program as the late Desmond. Injured by his own mania, he was rebuilt in a collaborative effort by undisclosed benefactors to make the ultimate killing machine. Little of his flesh still remains, all tucked away in a marching tomb of hydraulics, synthetic muscle, and reactive armor plating.

"It didn't matter to the corporations whether this lucky subject was overflowing with humanity, or sorely lacking in it. Only one thing mattered to them, and so it was wired into a towering frame of literal death-metal. The show was over for whoever he once was, but now the ENCORE had begun..." - Project Aid Gordon.

Astral security hot on your tail, you slide the breaker provided by the Don into the terminal. Surprisingly truthful in his claims, the Galactic-level genetic encryption key was broken, though the shame of what it took to acquire the sample would always stain your soul. The terminal boots up, and with frantic commands, the case file for Encore opens in full display.

Staring in fear, there is little time to act before a massive hand powered through hydraulics and synth-muscle clamps around your skull. Beyond your whimper and the slow squeeze of machinery, you can only faintly see the reflection of the monstrosity behind you.

"END OF THE LINE, BLOOD-PUPPY."

Desmond did this to you- me. Ejected from Valkyrie, what happened to me? What is this? Is this.. My fa- 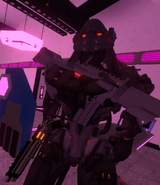 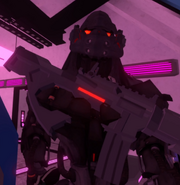 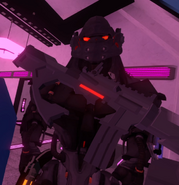