Black
Duncyn Kuiper is a tiefling who used to work as an assistant in Quasar Works, a weapon forging shop in Callous Row. Duncyn was given this job by his boss Talus Nova. It would have assisted in jumpstarting his career, but he got fired. After snagging a job at Jack Montagne's cyberware repair shop, Duncyn can finally work with synths, which aligns with his passion--robotics. Duncyn lives a very poor lifestyle but adores any rich food they can get their hands on due to his malnutrition. Duncyn hopes to patent his own technology one day to start earning serious cash and make his family proud.

Following the death of his mentor and boss, he is now the sole owner of the cyberware repair shop in the Row. He has lovingly dubbed the shop as "Second Hand".

They are portrayed by Spltoon.

Born and raised in the outskirts of society, Duncyn has never experienced any sort of luxury. Despite this, he has kept most of his innocence and positivity intact and looks toward the future. He was always fascinated with the concept of weapon augmentations and drones as a child and always wanted to patent his own technology to share with the world. When he became an adult, he decided to set out and make his mark on the world for him and his family. Boarding a bus from his home planet, he set off to the glorious Savior City in hopes of finding work with people that had similar interests. Faced with very little options, he was told that Callous Row was "perfect" for someone like him. Excited with the prospect of progress in his dream, Duncyn was extremely eager to set off to this so called promised land. He hasn't quite come to terms with the fact that he's trapped in a shithole yet, and he still has a positive outlook on where he is. An honest soul, Duncyn is a rare sight in the dark alleys of Callous Row.

Talus Nova and Duncyn Kuiper opening up Quasar works for the day.

Duncyn behind the cashier at Jack Montagnes shop. 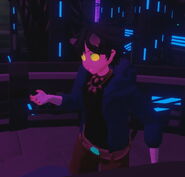 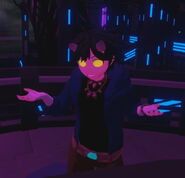