Milkman (as The Milkman)

"It's like my mother always says: if she has a tail, it's time to nail." ― Drumsy

The number 1# news reporter in VRChat. He does videos that are framed as news documentaries like 30 for 30s. He is well known for his hard-hitting exposes and aggressive reporter persona. The news channel he reports for is Drumsy News.

Drumsy began uploading news reports on VRChat to his YouTube channel in February of 2018, and started livestreaming on Twitch several months later. His YouTube videos follow a general format where he reads a question from his twitter page and spends the rest of the video finding the answer. He’ll have several misadventures as he interacts with VRChat’s many denizens, with clips broken up by narration over b-roll stock footage. At the end he delivers a monologue on what he’s learned.

Drumsy is typically joined by one of his co-anchors; originally he was partnered with Paymoney Wubby, and later they were joined by Moxification and That French Guy. Eventually Paymoney Wubby split off to work on his own twitch channel, though he later came back to plot his revenge on Drumsy for his mistreatment while working for him. Wubby succeeded in murdering French Guy and tried to have Drumsy poisoned, but when that failed, he captured Drumsy and had Moxi take over the channel. In the end though, the two made up and became friends again, though they confirmed that French Guy was dead and never coming back.

Drumsy was later joined by his virtual reality girlfriend Brooke Bork, who despite claims to the contrary is not kept locked in his basement. Brooke and Moxi are now the current employees of the Drumsy News Network.

Drumsy’s twitch live-streams follow a slightly different format. Instead of pre-scripted narration and stock footage, Drumsy has multiple scenes set up that allow him to use different backgrounds and music for dramatic effect while in VRChat. He also has much more direct interaction with the audience, hyping his chat to express "Big peepee energy." Recurring segments include reports by Shanaynay the female news dog, Swiper the Depressed Fox, and Nemo the Weatherman. When he raids other live-streams, he’ll adopt the persona of “The Milkman,” an obese walrus-elephant hybrid that will tell the people he raids to “Chug Milk.” When they do drink milk, he will tell them “Milk is just cow cummies.” 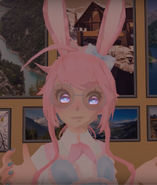 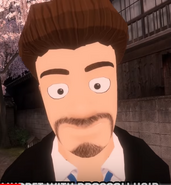 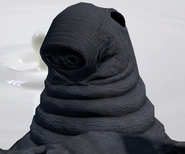 Drumsy as The Milkman
Community content is available under CC-BY-SA unless otherwise noted.
Advertisement