Emilia was born as the oldest of three children into the latest generation of the Cree-family. Her home planet is Ghibalb in the Orion complex. Unlike her siblings she never shared their fascination with the occult and had a greater interest in scientific means of problem solving which created a gap between her and her mothers side of the family.

After spending most of her childhood in a boarding school she entered university at the young age of 15 which made her family declare her a “completely lost cause” (other than her grandma because she is too stubborn to accept that Emilia will never become a witch). One year later Emilia started sciencetubing and over the following years turned her hobby into a job. She earned her PhD at the age of 21 and then got hired by Nirvana to assist them with fixing up their image issues and got sent to Corvanis to assist the staff working there.

Today, Dr Emilia works on Corvanis 3 as a Nirvana journalist, and due to her combat skills was also temporarily in charge of planetary Nirvana secruity matters until David Walker was promoted.

Dr Emilia's first day on the job is spent getting acquainted with fellow Nirvana employees and their labs/offices. She spends much of the day helping the current head Ama Krolia repair and establish connections with other corporations in the Uppercity

Nirvana employees resting after coordinating the analysis of the sample, and the resulting Uppercity decontamination 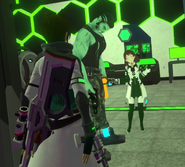