"Doctor" (Self titled, not actually)

Male
Dr. Zig Malice is a "back door pharmacist" supplying drugs to the dispositioned inhabitants of Callous Row.

He at first joined the Clinic in the slums working for Dr. Cellulose but was eventually fired after being "deemed unfit for work" by her.

It should be noted that "Dr" in Zig's name is self titled, he is not actually a doctor in any way shape or form although he prefers to refer to himself as such.

He used to be respectable to some and passed his medical school with flying colors and a degree but through suffering from personality disorders and self-medicating he got addicted to his own supply, tanking all his job positions and loosing reputation.

Moving to the big Savior City he was first stationed at various strange places of medical profession, many an inconvenience for someone with his illnesses. He found love in the city but finding it too much to handle he gave up on it and through that his life took a turn and went on a huge spiral down the gutter. Self medicating even more than before he used his knowledge of medicine to take his own personal drug trips, sending him down a very dark mental path leading to him living in the slums of Callous Row.

Through his own mental illnesses he wanted to learn how Humans work and through educating himself on their conditions he learned about his own but was never officially diagnosed but people generally just shrugged it off as him being that "emotional guy".

Dr. Zig was sacrificed by Ciara to free the Undercity residents from a Dark Spirit trapping them below. 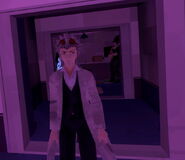 Tying to sell a robot leg to Becky

Zig and Becky
Add a photo to this gallery
Retrieved from "https://vrchat-legends.fandom.com/wiki/Dr._Zig_Malice?oldid=88258"
Community content is available under CC-BY-SA unless otherwise noted.