Male
Desmond is a street samurai and ex-soldier from the Mars mega-corporation's armed forces. He is a post-human as he was in a genetically modified soldiers program as a child.

He carries around the digitized mind of his dead girlfriend A.L.Ex.. Always carrying her cybernetic brain with him at his hip, she means the world to him.

Recently making his way to Savior City, he finds himself in its slums called Callous Row.

Desmond Thomas “Geist” Geistman was the only child of a poor family. At the age of six his parents traded him in to pay off their debts to the Mars-corporation.

After testing him for compatibility, Mars decided to use him as a test subject in their newly founded Spartacus Program, a program to genetically modify soldiers to improve their combat performance. He got transferred to the laboratory of Professor Alvin Monorock, one of Mars's leading scientists.

As the only non-adult test subject, he grew up isolated from other children of his age until the daughter of Prof. Monorock, Alexandra, started visiting her father in the laboratory on a daily basis. During his time in the lab Desmond grew extremely close to her up to the point where he developed romantic feelings for her.

At the age of 17, 11 years after he joined the Spartacus Project, Desmond got assigned to an elite Mars force and deployed for the very first time. When he left he confessed to Alexandra, and she promised him to wait for him until he comes back from deployment.

After three years of active duty he finally managed to return to the lab and confessed to Alexandra once again, who told him that she also had feelings for Desmond for a very long time. But their time together was cut short, because soon after they reunited, Alexandra was murdered to take revenge upon Desmond.

Professor Monorock used Alexandra's dying body to create A.L.Ex., an A.I. that contained all the data from her brain. Desmond decided to hide her with the help of a former comrade, Lynn, who he met in military service and who just recently returned from a deployment to Callous Row. She proposed to Desmond to hide in Callous Row and sent him to the city with a message for her friend Dr. Universe.

Desmond on a guided tour. A.L.Ex. on his hip. 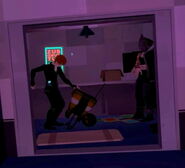 Introduced to Bethany in her shop. 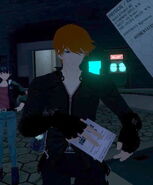 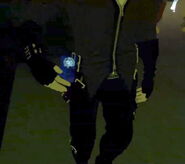 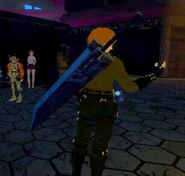 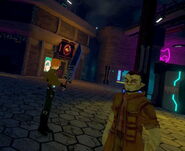 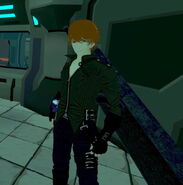 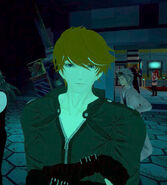