David Walker is the head of the AVALON Corporation on planet Hellion. He owes everything to Avalon and will stop at nothing to ensure its safety and dominance.

He is a rational person, but when it comes to threats and insults to his corporation, emotion will often cloud his judgement. He has no time for anyone outside the Upper City.[1]

David had a sheltered upbringing in the middle city, and has no experience with people from the Row and beyond. Due to his inexperience he sees them as "lesser" than the rest of the inhabitants of Salvation City.

Before becoming an Upper City guard, David worked in a Middle City clinic, moving through the ranks and eventually becoming head of security there. After around 5 years, he was offered a position as a guard in the Upper City. Frustrated by bureaucracy in his current workplace, he accepts the job as a fresh start, especially considering it was only slightly less pay.

Experimented on by an Avalon scientist, he has some feline genetics mixed in with his human DNA. He can hear better and run quicker than most humans, but he has also picked up a few cat-like quirks.

At the end of his first day as a guard in the upper city, David is genetically enhanced by Dr Alice Constantine. His DNA is augmented with feline DNA, and he starts to display various interesting traits, such as meowing at the end of every other sentence

David's personable nature draws the attention of the Avalon staff, who were currently lacking a dedicated head of security. His employment history in the Middle City clinic makes him an ideal candidate to fill the role, and he is hired

David spends his first day as the new Head of Security at the Avalon Upper City offices, and delighted to learn that Dr Emilia Röntgen brought pizza to his first daily meeting

He starts the handover process with Emilia (the previous acting head of security), but is cut short by a request by Mr Bobken for a combat medic. David is hired for an expedition to The Golden Lance to retrieve a sample of a strange alien life form, which he accepts

Armed with a sniper rifle, pistol and as many medical supplies as he can carry, David tends to wounds and provides long-range support as the multi-corporation crew fight through the derelict spaceship. They are set upon by the desert raiders who have made the ship their home, but ultimately they succeed with only one Valkyrie guard succumbing to his wounds. The alien sample is collected and taken to GEB for analysis

David gets home late, with a dozen missed calls from his new boss Ama Krolia, who apparently spent the last few hours of the day searching for him out in the wastelands

The corporations work together to contain the alien sample from the Golden Lance, which was threatening to break through its container

They place it in the Valkyrie arena, and Avalon surround it with medical scanning equipment. The alien breaks loose taking the form of a large humanoid creature, but the combined firepower of the corporations bring it down. As it attacks, the alien screeches "You're running out of time"

Armed with the scan data from the arena, David attends a meeting of corporation security heads to address the incoming threat. Comparing notes, they come to the following conclusion:

As such, the plan is to only engage the alien under cover of a radio jammer (Courtesy of Horizon), and use a single approach for as long as possible before the alien learns and adapts

David has been working with Emilia on a new product: Icarus. It's an auto-injector that can stabilize critically wounded people, and keep them alive and fighting until they can find proper medical treatment

Riley annoys David by insisting his co-workers are possessed and that he goes into the Masaru lab expecting some sort of possession-based a firefight. He enters rifle drawn, to find the Masaru employees essentially just hanging out with only one minor bullet wound between. Damnit Riley

Towards the end of the day, Riley informs Avalon that several Masaru members have been injured and that the clinic needs to prepare. The Nrivana employees proceed to sit outside the clinic for 45 minutes, until both Lord Qroak and Riley turn up. Qroak, clearly very angry with Riley, asks David to step outside, and David is perfectly happy to oblige. Lord Qroak proceeds to bite off Riley's head

Attacked by Qroak after he turned into a monster 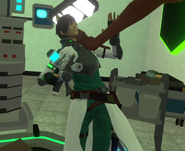 Phillis and the knocked out David

Grandma Phyllis gives them no choice but to break the rules, keeping her granddaughter alive