Brunette
Dash Spacer is the TraVerse Pilot and EMT working under Dr. Cellulose Universe together with Static and Celeste at the clinic in The Row.

He is quick on his feet, usually going for the objective or with the solution that comes to mind first. He lives a middle class lifestyle within the clinic where he spends most of his time when awaiting medical calls.

His past makes him fearful of women, but he will still assist any that are injured so as to not let others suffer the past he has. He hopes to one day own his own medical ship to beam and transport injured people off cruel worlds. Dash just wants to save people and do it fast. He is portrayed by Kareeda.

When Dash was but a young man he was tasked by his two fathers to go fetch an item. He wasted time and didn't care he was running late. When he arrived back home, both his fathers and his home were gone... If only he didn't waste time.

After he was picked up by the Janus foundation, a family of 3 women took him in. Sadly, this meant he had to leave his home planet and live on Hecate, a planet with a population consisting for 80% of women, a harsh contrast with his home planet Hermes, which was 80% men. Men aren't held in high regard here, so not only was he treated poorly outside his new home, but within his two new mothers and sister put Dash though horrible acts. He developed his fear of women and aspired to flee and get away from them.

He went to school as soon as possible by saving everything he earned working as a courier. He wanted to prevent what happened to his real parents from ever happening again and wanted to get away from his horrible situation. He left for a medical school on Apollo where he found his calling. He knew what he wanted to do with his life and dedicated himself to never allowing what happened to happen again to someone else. 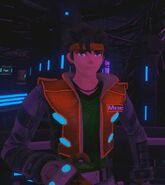 Dash in the clinic with Capernicus Fawkes