Darius is an armored raider from an encampment of wasteland raiders on Corvanis 3, somewhere northeast of Scrap Town outside of Savior City. He wears a skull mask, completely covering his face.

In Season 2 Episode 12 he ambushed Scootz, Sten Berglund and Sean Ward. Armed with a union rifle he finds them as they were unprepared during a sandstorm, right after Scootz had fallen out of their vehicle and was shouting for help. Having been out scouting for crystals in the wastes they were ordered to give up their treasure as well as their weapons. Attempting to appeal to some mutual benefit in the bandit Sten suggested the potential for trade instead, but it was a folly as he just ended up giving out information about themselves. In Darius own words he doesn't trade, he takes what he wants.

As they were about to leave with their lives still intact, Scootz makes a simple mistake that turns catastrophic. After learning the bandits name - Darius - he throws one of his usual insults out - calling his name dumb. Not taking kindly to it after a short exchange, the raider shoots him point blank in the head. Sten and Sean put the pedal to the medal back to Scrap Town hospital, but after receiving treatment his wounds are too severe to be saved and he dies.

Out there somewhere Darius and his crew remain. 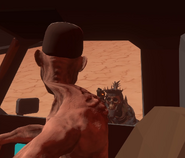