"Imagine you are born into a room with no windows or doors. What would you truly know? Only your experience of that place. What would change if you knew there was a whole world beyond? Would it change you? " ― Damien, Introduction to Astral Planes 101

Damien Masaru is President of the mysterious Megacorporation Talaris presiding over corporate operations on Corvanis 3.

Damien is best known publicly as a thought leader in magical research. He's published several renowned academic papers. His specialties are astral projection and extraplanar entities. His thesis on the astral is the currently accepted authority on the subject.

Professionally, Damien has created several new Talaris product lines in Savior City. Advertising magical enhancement in everything from beauty to fitness, these products are sometimes criticized for questionable MLM tactics and a lack of empirical data that shows their efficacy. These products have brought billions into Talaris in recent years.

He is also known as an accomplished academic mage. He speaks on Atlantis media, at corporate events, and at schools concerning magical theory. Certain tabloids have claimed that Damien possesses immense magic knowledge, others say that his work is only theoretical. Sensationalist media claims that Talaris seeks to control the darker powers of magic under his leadership. No proof of this has ever been found.

It's known that Damien was born into a wealthy family. He attended a Talaris-sponsored school for aspiring corporate mages.

In the Holonet Documentary "The Strange Tale of Talaris" it is said that Damien once ran the Talaris division for corporate surveillance and astral projection research. He moved quickly through the ranks to Senior Management after several supposed breakthroughs. He was invited to lead Talaris by the corporate board after a few years in Senior Management.

Though his work as President of Talaris is speculated on, Talaris' profits have increased substantially under his watch. New product lines he has introduced include:

Talaris frequently publishes data on the efficacy of these products, though no one from outside of the corporation has ever collaborated on it.

Damien is one of Corvanis 3's leading magical theorists. He is a frequent guest of Corporate Universities and often a guest speaker in magical research classes.

His work in astral theory is the currently accepted understanding of its planar nature. Several academics reference his research papers, collaborated by Talarian mage-scientists on the bleeding edge of research. Damien has also written the first treatise on interactions with Free Spirits, though no mages outside of Talaris have met them.

As President of the world’s leading corporation for magical pursuits, Damien is rumored to be a magic user himself. It's unclear if he simply dabbles with the occasional incantation or if he has some actual knowledge of spellcasting himself.

Interviewers have gone on record saying that Damien carries himself with a bizarre confidence for an unaugmented human. He has a predatory confidence befitting of a man behind a bulletproof wall - despite appearing entirely ordinary.

Damien sometimes creates small cantrips for demonstrations of magical theory during his coursework. His actual spellcasting ability, if any, is unknown.

At a public speaking event in Callous Row, witnesses claim that a mug thrown at Damien shattered in mid-air before reaching him. Officials were unable to collaborate this story.

Damien has full access to Talaris' immense resources. This may potentially include any of the vast amount of employees of the Talarian organization.

Including but not limited to:

The PLATINUM Lazerus Program Nirvana Contract - Damien is insured under the highest level of Nirvana life insurance contract. Any serious threat to him is quickly answered by dispatching a High Threat Response (HTR) team to his location:

Damien's entire career and history are based on his reputation. People in his world have everything to lose. Details specific to his public reputation and how it interacts with Talaris and the greater powers of Corvanis 3 are unknown.

Damien’s actions are always under scrutiny. As Talaris direct representative in Savior City, he must constantly be aware of his actions.

Damien appears to be completely unaugmented - an almost unheard of trait for someone at his level. Reasons for this are not known. 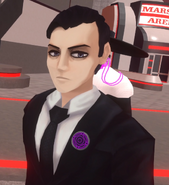 Meeting with John Goldman of WOTO about tracking down Kaiphus

Meeting with John Goldman of WOTO

Damien and Fred sense magic in the brothel

Inviting WOTO on a mission to the necromancers lair

Damien and Ciara Ní Éabha after the Atlantis gala